As I began to dig my teeth into the various facets of the housing crisis in North Grenville over the past couple of weeks, I was told time and time again, “You have to talk to Jim.”

I met with Jim at Curry Park, and found that his story not only illuminates the severity of the crisis, but raises some unique questions.

Jim Gibson is 67 years old, and has recently been evicted from his rental home of 25 years.

When the owner of his rental property died, Jim was initially told he would have two years to get ready for a move.

Quickly, however, this timeline was changed to just three months. Since then, Jim has scoured the area for a place. “I put 2300 kilometres on the car looking for a place.”

Like many other residents in search of housing, Jim has found every potential property already snatched off of the market or a non-existent scam.

Jim’s situation is further compounded by two factors: he needs something affordable, and he needs to be able to bring his pets.

Jim worked for the township for “20 some years.” He worked at the landfills of Burritts Rapids, Kemptville, and Oxford Mills. He typically worked alongside Gary Boal, who was struck and killed on the bridge over the South Branch River in 2017.

When Jim retired, he recalls it was “just another heartbreak. I didn’t get a thank you, handshake out the door, or nothing.” Municipal employees are typically recognized for their service upon retirement.

As Jim explained his situation to me, I wondered about why the western world at large seems to view the people that handle garbage as somehow contaminated by their profession.

As a society, the term “garbage man” has somewhat fallen out of fashion; now, we prefer a more politically correct “waste collector.” Nonetheless, stigma lingers. But should waste collectors quit, we would quickly become overwhelmed by our own refuse.

We owe our waste workers, past and present, our sincerest thanks for dealing with our garbage so that we don’t have to.

Jim isn’t holding out on hope for such a social change. He does, however, have the, “best buddies a guy could ask for”, as well as two pets that are like family to him.

His cat, a 21-year-old calico, came into his life shortly after the death of his first wife. Jim says, “I called her Angel, just because of the way it fell into place.” Angel was only a kitten then, looking for a home.

Jim’s dog, Dalton, is a rescue from Big Sky Ranch. Jim’s second wife, Natalie, suffered from seizures. He remembers, “if she went into one of them trances, Dalton would snap her right out of it.” Natalie’s specialists were amazed by Dalton, and told the couple, “don’t get rid of the dog. He’s protecting his mom. He loves her to death.”

Jim lost Natalie two years ago. She was only 45 years old.

He laughed that his friends keep telling him, “I have no idea how your system is even handling it.” I laughed too, because it’s true. “With all of this bullcrap I’ve been through, to all of a sudden get a kick in the teeth, after 25 years of rent in the house, for somebody to treat another human being like that.”

For now, Jim is housed thanks to the generosity of a friend. “At least it’s a roof over my head, and for my dog and cat. I have access to hydro. But, I mean, it’s not like a home home.”

Though it is not legal for a landlord to prohibit pets entirely, the few possibilities that Jim has found for more permanent housing have strongly requested that no pets be brought on to the premises.

“I just totally refuse to go somewhere where I am not allowed to take them. They’re the only family that I have left, you know. I only got one brother left, and he’s in Brockville.”

Jim has hope in the fact that the community is pulling hard for him. Of the Salvation Army, he says, “I love every one of them that work there. They all treat me good.” Jim has also explained his situation to Mayor Peckford. He says she has spent hours listening to him, and he’s confident she knows “something’s got to be done, and done fast.

This can’t go on for another six months or a year. What’s going to happen, not only to me, but other people going through this like me?”

Of Mayor Peckford, Jim says, “she’s a really, really good person to have pulling for you.” 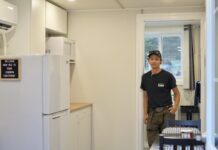