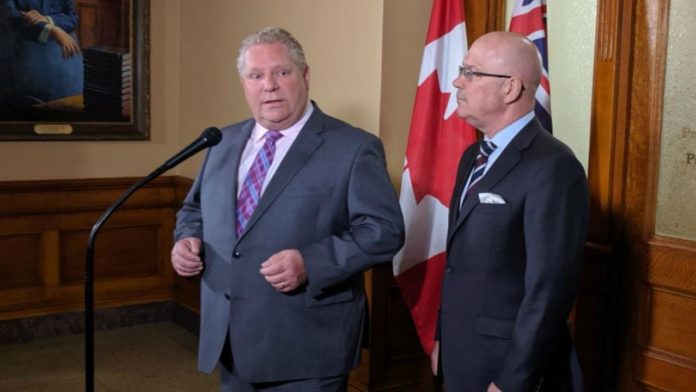 When the Ontario budget was released last April, the reaction against it came from across all sectors of the province, particularly from municipalities and healthcare organisations. In their efforts to cut the deficit, the government retroactively cut funding and changed cost-sharing programs to download about $500 million in costs onto Ontario’s 444 municipalities in 2019.

These costs reflected changes in government cost-sharing for child care, Ontario Works and paramedic services, although not downloading on other such services as public health. That area, too, was in uproar, as the budget also included the amalgamation of local Health Units, reducing the total number from 35 to 10. Under the proposed new boundaries, the Leeds Grenville Health Unit would become part of an Eastern Ontario regional public health entity, running from the Quebec border in the north and the east to beyond Kingston, and including the City of Ottawa. The enlarged health unit would include more than 1.6 million people and cover almost 29,000 square kilometres.

An Environics poll of more than 1,300 Ontario residents between May 15 and May 16, found that 70% strongly opposed the province’s plan to cut local health units and their funding. A further 13% said they somewhat opposed the plan. Dr. Paula Stewart, medical officer of health in Leeds, Grenville and Lanark, said she is concerned that smaller areas would not have a voice in a large regional health entity.

These changes are not, according to the government “cast in stone”. “While the government will bring forward proposals, the specific boundaries and headquarter locations for the new regional health units will be finalized in consultation with municipalities through these groups,” said Hayley Chazen, spokesperson for Health Minister Christine Elliott.

The aim of these controversial elements in the provincial budget was to try and come to grips with the provincial debt, and the crippling interest payments that are required to service it. The debt now stands at $347 billion, with the province paying $1 billion a month simply to pay the interest. However, loud protests from the Eastern Ontario Wardens Caucus, the Association of Municipalities of Ontario, and other parties, pointed out that the downloading of services and charges was announced after most municipalities had already decided their own budgets for 2019. The Ontario government’s announcement threw those calculations into complete chaos.

Now it seems that those protests have made it through to the Premier, and local MPP, Steve Clark, Minister of Municipal Affairs and Housing, has apparently played a large role in having the controversial budget elements reversed, at least for the present.

Premier Doug Ford appeared with Steve Clark outside his office on May 27 to announce the reversal of the proposed cuts. In a later statement directed to municipal councils, he pointed out the need for some form of action to deal with the debt, and emphasised that municipalities had a responsibility in that area too:

“We believe that very government needs to step up and do its part: there is only one tax-payer, and the job of finding savings while protecting core services rests with every elected official in Ontario”.

The Premier then specifically acknowledged the role Steve Clark had played in convincing him to take this action, stating that he was “following the advice of my Minister of Municipal Affairs and Housing, Steve Clark”. The Minister himself emphasised, however, that this is not the end of the matter. Municipalities will now be expected to find savings in their own budgets of 4%, not an easy task.

The Ontario government is making $7.35 million available through the Audit and Accountability Fund to help large municipalities find those cuts. $200 million is being provided to small and rural municipalities, such as North Grenville and Merrickville-Wolford, “to modernize services”, which Ford says “will play an important role in meeting [the savings] objectives”.

“Minister Clark has advised us to take this approach on the understanding that, as partners, Ontario’s municipalities will use the additional time to work with the government of Ontario to transform critical shared public services and find the efficiencies that will ensure their sustainability”, said the Premier.

Mayor Nancy Peckford welcomed the Premier’s announcement, saying that, although “Most of the cuts in question would have affected the County budget. There was little to no impact on North Grenville’s budget; however, there was the potential for significant impacts to services that residents enjoy across the County, including here in North Grenville. To that end, there is no doubt that Premier Ford’s reversal of some of the proposed cuts is a recognition that too much was being asked too quickly of local governments, and that residents would have likely suffered as a consequence. I am very pleased to learn there has been a pause, and that Minister Clark, who comes from local government himself, was able to hear that message loud and clear.”

Calling all Seniors Groups and Organizations

Letter to the Editor – Fiscal Responsibility

Municipality and Hospice to receive money from Resilient Communities Fund