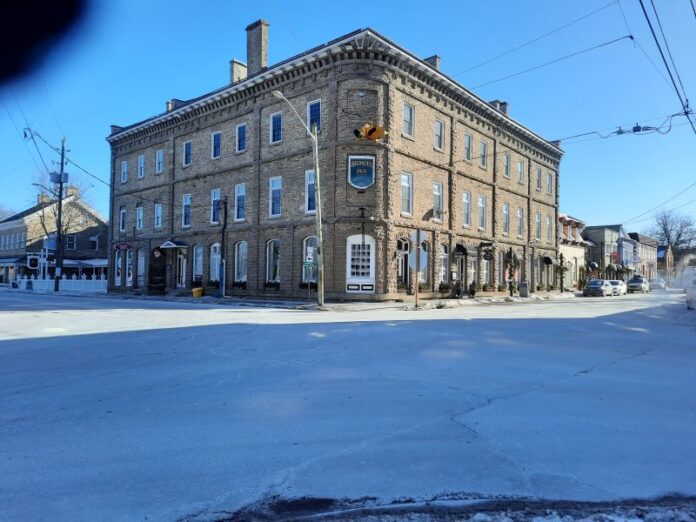 At around 9:40 am last Thursday morning, the Merrickville Fire Department responded to a call at the Baldachin Inn following reports of a structural collapse. Two construction workers had started renovations in the attic of the building when part of the 160 year old building’s floor gave way and one man fell through, landing in the Ballroom and breaking his femur. There has been speculation about the contractor used in the work in the building, and that is one issue that will be investigated in due course.

Immediately following the accident, the fire department ordered the entire building to be evacuated. This included not only the two other businesses that share the building, the Knock Knock Shoppe and Pickle and Myrrh, but also four residents who were shocked to find all this going on when they emerged moments later. According to one Merrickville resident at the scene, the authorities were unaware of any residents living within the building and were surprised when they appeared at the door.

The extent of the building damage is not yet known, and a full investigation is underway. It is believed that no building permits had been obtained before work commenced, and three Ontario Building Code Act violation notices have been put on each door of the property by the Village authorities. One of the orders states “Submit proper plans for construction and obtain permits and inspections to go with remedial work”. The Baldachin and accompanying businesses will remain closed until at least January 27, by which time several of the code violations need to have been addressed.

The damage to the building, and the possible implications for its future, are of grave concern to the residents of Merrickville-Wolford, as well as to all lovers of built heritage. When the Baldachin was built in 1860, it housed the largest department store between Chicago and Montreal. Because the Rideau Canal was one of the region’s main modes of transportation when it opened in 1832, it provided customers for the thriving department store.

One of the most interesting features of the Baldachin building is its third level, a ballroom with 15-foot high stone walls and hardwood floors. Large enough to seat 200, the ballroom is completely open, free of vertical supports. The King’s Truss system that was used to accomplish this is a unique style that is only found in one other building in North America. In the 1800’s and 1900’s, the ballroom had been a Millinery, where hats were designed and made for fashionable women. The smaller room next to the ballroom was a dressmaking shop, the size difference of the shops reflecting the buying trends of the time. While women usually sewed their own clothing, they pampered themselves with a new hat as the seasons changed. In the early 20th century, when Harry McLean, railway builder and eccentric millionaire, owned the building, legend has it that he used its ballroom’s large open space as a tennis court.

For 75 years, until the Depression, the Baldachin remained the largest department store in Canada. The historic community of Merrickville was a sad place during the 1970’s, and the building fell into disrepair before part of it was opened as a dining room in 1987. In the spring of 1988, the building was purchased by Dave Ellis, who restored the entire building over the ensuing years. Of the two other stores in the building, the Knock Knock Shoppe has been a tenant for almost as long as Dave has owned the building.

Pickle and Myrrh, which had just finished baking and fully replenishing their stock, have been embraced by neighbouring businesses which have offered to sell the store’s delicious caramels, now dubbed ‘Crisis Caramels’, on their behalf. Wick Witch Apothecary, The Village Bean, Violets on Main, and Valley Custom Cutting are now stocking these delicious treats, and the show of support from these places has offered a little sweetness during this trying time. 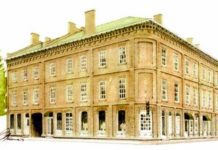