In the last issue of the Times, we reported on the unique newspaper find behind the wallpaper of a residence of North Grenville, and some of the potential areas of history that find opened up. This week, I’m really glad to say we have another exciting discovery in local history uncovered by a local resident. Donna Lewis read in the Remembrance issue of the Times about the men whose names are inscribed on the Kemptville Cenotaph, but about whom nothing was known. So she got to work.

Donna had researched her own family links to World War I, following a family tradition of keeping records, as she explained: “I guess I could say it is in my genes; my great grandmother, then a great uncle and my aunt, were all keepers of family history on the paternal side of my family and, a few years ago, the baton was passed on to me.”

Having become acquainted with WWI archival sources, Donna got to work on the names of the unknowns on the Cenotaph, and managed to track down a number of them – so far.

“I am 99% sure I have found Private A. Scott; he is Pte Andrew Leslie Scott, 639409. Born on August 12, 1897, in Glasgow, Scotland. Enlisted in Merrickville aged 18. Sailed from Halifax in October, 1916, and arrived in France in March, 1918, after being stationed in England. Andrew died of gunshot wounds on October 2, 1918 near Wimereux, France. Andrew may have been a British Home Child, and his next of kin is listed as a sister living in Glasgow.

Not everyone can be found, however. Some men had the same name as so many others, where only their initial is known, that it is often impossible to find the “right” one in the records. Donna noted this about Privates G. Grey and A. Irvine:

“Between 1914 and 1919, 8 Greys are listed and 15 Irvines. I have checked the attestation paper and file for each, and also checked 12 Grays for any connection to North Grenville, but was unable to find any.”

One interesting mystery that Donna found, which confirmed the findings of two other local researchers, Harold Tompkins and Roy Brown, who have done tremendous work in this area, is the presence of William Stewart’s name on the Cenotaph. William lived in Kemptville and served as a telegraph operator during WWI, but he survived the war and returned home safely. He died in 1973 in Saskatoon, so why is his name on the list of fallen? 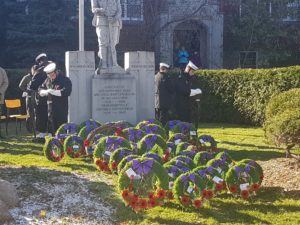 The work done by Donna, Harold, and Roy, as well as the ongoing research included in our annual Remembrance issue, continues to give a personal identity to what are otherwise names carved in stone. It is also a great example of the kind of local history that can be done by residents who find themselves intrigued by the past. Even this week, another resident has been in touch about a find in their home that may well add yet more to our shared story. More on that another time.