After a year since it was initiated, the Mayor’s Task Force on Affordable Housing completed its mandate and presented its Final Report to Council at the March 10 Committee of the Whole meeting.

The mandate of the Mayor’s Task Force was to examine the current state of affordable housing in the Municipality and make recommendations for strategies and oppor- tunities to expand access for residents.

“North Grenville is a rapidly evolving community where housing is becoming more expensive and rental options are very limited,” said Mayor Nancy Peckford. “Affordable Housing is a priority of Council, and the Mayor’s Task Force was established as a means of identifying short and longer-term objectives aimed at expanding affordable housing options for residents of North Grenville”.

The Final Report includes 18 recommendations. “The Task Force on Affordable Housing sought to bring a local lens to this issue by identifying current gaps and opportunities. Our recommendations highlight actions that the Municipality can take to increase access to affordable housing,” said Colleen Lynas, Task Force Co-chair.

“We are encouraged by the Mayor and Council’s enthusiasm, and look forward to quickly seeing the results of the implementation of the recommendations,” said Co-chair Carl Cannon.

Council appointed nine members (including two Co-chairs) to the Mayor’s Task Force on Affordable Housing in January 2019. In addition, a Community Advisory Group was es- tablished to assist the Task Force in their efforts.

Over the year, the Task Force met monthly and heard 17 delegations from a variety of experts in the areas of government policy and programs, affordable housing projects, and housing for those in greatest need.

A Public Discussion Forum was held at the North Grenville Public Library on October 22 where the Task Force presented the Interim Report.

The Final Report can be found on the municipal website (under Task Force on Affordable Housing) at: www.northgrenville.ca/ task-force-on-affordable-housing. 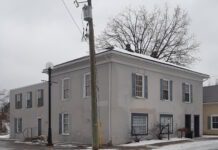