The Faith and Science Forum held their last meeting at Leslie Hall last Thursday, before the hall is due to close. Robert Porter dropped in to thank the two long-term St. James members for their consistent attendance twice a month for the past eighteen years. Mack Whitman and Jim White were all smiles as the other members of the group congratulated and thanked them, too.

The meetings were organized around a chapter of a book or a video. Some topics have been discussed more than once, as they naturally would surface again in subsequent meeting discussions. It has been challenging to give due attention to faith as well as science. Both topics have been significantly affected by culture during the last century.

The membership has varied over the years. The group was originally started by Ray Porth, who served the parish at the time. He encouraged participation by interest rather than denomination. The group survived after he left for another parish and recently new members have joined adding up to about a dozen men and women.

The meetings will be moved to a room at the Christian Reformed Church at 2455 County Rd 18. If faith, or science, or both interest you, please consider checking out this Forum during the first and fourth Thursday of each month. 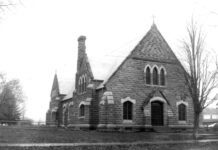