So now we’re back to when politics and democracy is, largely, a spectator sport. We had our chance to have some say in how we’re governed, and the end result is rather less than encouraging. In Ontario as a whole, more than 10 million people had the right to vote. Only around 43% of them did so, the lowest rate of voter participation since who knows when. It was even less than the rate at the last election in 2018, which was 57%. The PC Party of Ontario has been returned to power, with an increase of 17 seats, having won the support of a little less than 2 million votes, or almost 41% of the votes cast.

Think about that: a government with an increased majority won 41% of the 43% of votes cast across the province. A minority of a minority of eligible votes.

Fair enough: the votes gave the victory. And what a victory it was. Not only did Ford increase his majority, he managed to end the political careers of the two main opposition leaders, an apparent clean sweep of support. But, once again, think about it. The PC’s got 1.89 million votes, the NDP got 1 million, and the Liberals got 1.1 million. But the PC’s got 83 seats, NDP got 31, and the Liberals got a measly 8. Is that really a shining example of democracy in action? Look at the NDP/Liberal situation: the Liberals got more votes, won a greater percentage of the votes cast, yet ended up with a quarter of the NDP seats. How can that be?

The situation in our own riding, that of the ridiculously long name: Leeds-Grenville-Thousand Islands and Rideau Lakes, was not much better: Of the 86,847 eligible voters qualified to cast a ballot, only 49.12% chose to do so. And while Steve Clark can be congratulated on winning a massive 57.8% of the votes cast, that amounted to less than a third of eligible votes. His support, nevertheless, was still far beyond that of the second place finisher, who received just 7,786 votes. There is no doubt that Steve Clark deserved to win based on votes cast.

There are so many issues arising from this election. One is the rise of smaller parties. In this riding, we had the largest number of candidates ever to run in a provincial election here. Of the nine candidates, five received less than 3% of votes, and the bottom three won less than 1% each. But why this surge in small party candidates? It is, I think, partly to do with the same problem underlying the poor overall turnout. People are dissatisfied with things as they are. They simply don’t think the traditional parties represent them. So, either they splinter into smaller parties, or, more commonly, they just don’t vote at all.

But if almost 6 in 10 voters don’t bother voting, for whatever reason, we can hardly call that a sign of a healthy democracy. The reality is that 60% of the population do not take part in the political process at its most democratic, and, even more worrying, 80% of voters did not vote for the Ford government in this election. This is not unique to this election, nor, in fact, to elections in Canada as a whole. How can we continue to accept that such a minority of the voting public are effectively disenfranchised in their own democratic system?

Party loyalty plays a part in how people vote, and always has. But blind loyalty is as much a source of weakness as strength for the community at large. Situations change over time, generations change, policies change, personalities and issues change, but people still vote for their family favourite, regardless. This phenomenon means that it becomes incredibly difficult for other parties to break the stranglehold on political representation enjoyed by the Conservatives and Liberals, although the NDP have managed to a greater or lesser degree.

No, the real menace to democracy in Canada is First Past the Post (FPTP), the system which gives a winner-takes-all advantage to large parties with well-organised political machinery. Whoever gets the most votes in a riding, wins the seat, even if it’s just by a handful of votes, and even if it is with a minority share of votes cast. Even then, as the Liberals have experienced this time around, they can win more votes than the NDP and only get 8 seats compared to the NDP’s 31. What’s the answer? There is an obvious one: Proportional Representation (PR); you know, the system Justin Trudeau promised to introduce and then changed his mind about.

The major parties insist that PR leads to unstable governments, splinter groups, never-ending election cycles, etc. This is more of a myth than anything else. Many countries have one form of PR or another (there are many to choose from), and allow voters to be represented in their parliaments and assemblies according to their share of the vote. It encourages voter participation, because people know that their vote is not “wasted”, that the party they support will be granted seats in proportion to their share of the votes cast each election.

Yes, there are issues with PR, but perhaps not as many as is sometimes claimed. Coalition governments are often the result of PR, and they can be as stable and productive as one-party rule. They can even force politicians to find working compromises, policies that reflect the entire community, rather than the ideological demands of one section. One model of PR is sure to be useful in Canadian federal and provincial elections, it just takes some research and consultation. But wouldn’t it be worth the effort if it means that citizens feel that their vote will count, that more than 43% of them will be willing to go to the polls and take part in our democratic system? 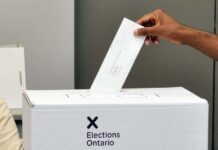 Don’t forget to vote on June 2