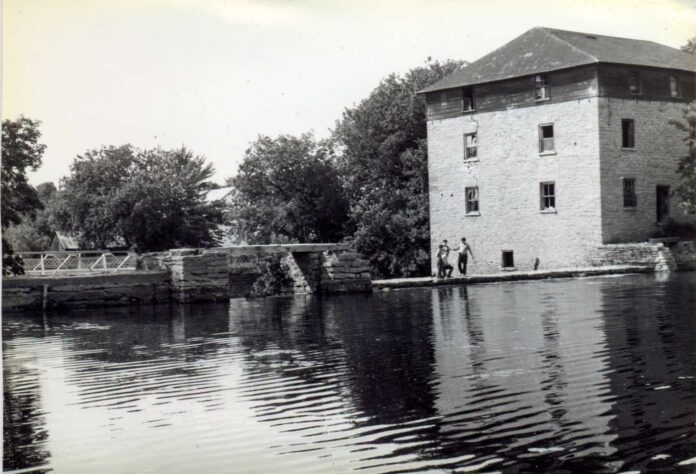 The North Grenville Historical Society [NGHS] is partnering with noted environmental power couple Dr. Fred Schueler and Aleta Karstad on a major research project which will trace the environmental history of North Grenville. At a meeting last week, the plans for the project were presented to NGHS members and the public and the main project participants were introduced by NGHS President, Ken Mews.

Canadian Museum of History Paper Conservator, Amanda Gould, is the Director of Archives for the NGHS and gave a brief presentation on the North Grenville Archives and how the project fits into the Society’s mandate and collections criteria. Amanda explained that the extensive data collection compiled by Fred and Aleta over many years would find a permanent and safe home in the NG Archives, as part of this project. Dr. Bill Adams, past-President of the NGHS, spoke of the importance, both historically and for today’s society, of knowing our past effects on the environment through our daily socio-economic activities, and how the data gathered in the project can be of use in examining climate change and the factors which influence the natural world, of which we are part.

Fred and Aleta presented an overview of the work they have been doing over the past forty years in recording the natural world of North Grenville and beyond. In that time, they have produced an uninterrupted database of tens of thousands of entries, giving an almost unique, unbroken record of change and stability in the ecology of the region. Their study area centres on the dam on the South Branch in Oxford Mills and the area included within a radius of 20 kms around it.

Dr. David Shanahan is the NGHS Historian, with thirty years of experience in Canadian and local history, with a speciality in aboriginal history. In his short talk, he described his role as providing an historical context in which Fred and Aleta’s work can be placed. This may help us to understand the effects our history has had on the environment, by examining land use and settlement patterns from the time before European arrival in North America, through to the present day.

This Environmental History project is possibly the first time such a cross-discipline study has been conducted on a local community or municipality. It will provide a record of the changes brought about by various activities of people in the area, including use of the South Branch for mills, the removal of the timber cover over time, the draining of wetlands, the effects of reforestation at Limerick Forest and the Ferguson Forest Centre, and the varying changes brought about by canals, railways, highways and increased residential and commercial development since 1800.

It is hoped to produce at least one publication as a result of the project, and applications for funding from the Trillium Fund are being prepared. Representatives will attend the Municipal Council meeting on January 23, seeking a letter of support for the application from the Municipality. Should all go as planned and hoped, further long-term funding will then be sought in the coming years to complete the work.

The NGHS has had a strong record of research and publications in the past decade, and has been heavily involved in community events and in promoting and publicising our local history by working with schools, the Kemptville BIA, speaking at service groups and other venues, and holding exhibits of local history at local restaurants and the Municipal Centre. The Environmental History project will be the most ambitious and far-reaching undertaking yet.