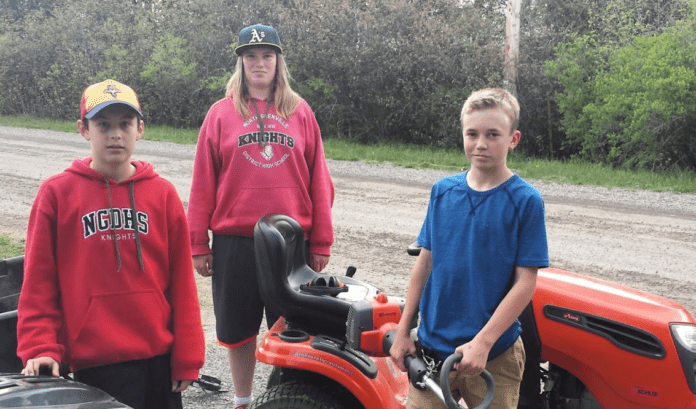 Three young people in Oxford Mills have recently received a harsh lesson in North Grenville economic development. The three boys, each 13 years old, decided to work through the summer break by doing lawn care work around Oxford Mills, where they live. Following a tradition going back many years, they made up signs on sheets of paper, with a contact phone number on the bottom, and posted them on three or four hydro poles around the village.

They were excited at the idea of earning some money and doing some outside work during the summer, but what happened next came as a shock. Ken Davidson, father of one of the boys, Evan, explains: “They attached these signs, with the little tear off phone numbers on the bottom, to 4-5 hydro poles around town. For the next couple of weeks my son would look eagerly at these signs as we drove by them to see if anyone had taken a phone number. We were away last weekend when one of the other boys received a phone call from a bylaw officer saying that signs were not permitted on telephone poles and their signs had to be removed”.

In our Green and Growing community, three teenage boys trying to do some honest work, instead of hanging around video games and corners, were told that their lawn care project was, in fact, a business, and they had to abide by all the bylaws governing commercial operations. This meant that they could not advertise on hydro poles. When the bylaw officer was asked how they could advertise for customers, he said they could only put up signs on their own property. Evan Davidson, Jack Johnston and Nolan Beavis have to abide by the same rules and sign bylaw regulations as developers in Kemptville, or real estate agents, for example.

It may be remembered that young people in Oxford Mills have suffered from municipal regulations in the past. Not too long ago, a young girl had built a chicken coop as part of her 4H activities, and was taking care of a handful of chickens. Down came the bylaws again, forcing her to remove the chickens because the property was not zoned for that. This was on a large property, with plenty of room, at the very edge of the village. But a neighbour, newly-arrived from the city, objected, and so the chickens had to leave. The neighbours subsequently moved.

Ken Davidson has contacted the municipal Councillors and Mayor, and Councillor Jim Bertram has met with him and invited him to the next Committee of the Whole to discuss the situation. The feeling is that, surely, some flexibility should be built into these bylaws. When it comes to young people trying to make some honest money, something all of their community should applaud, can we not realise that one size does not fit all, when it comes to implementing such regulations?

It is to be hoped that Council will listen to the case of these three young entrepreneurs and take steps to encourage, rather than squash, this low profile economic development project in Oxford Mills.