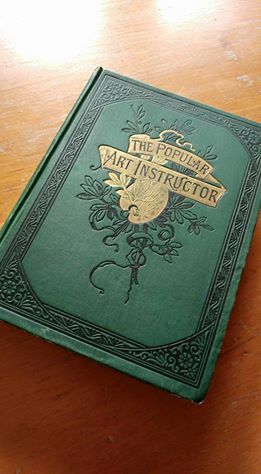 One of my hobbies that was boxed up and put in storage when baby raising started was a curiosity for tracking inscriptions in antique books. This old book has been in my possession for probably over 10 years, well before we moved to Kemptville. And when a box of books came tumbling out of storage I just couldn’t resist this one. The Popular Art Instructor from 1887 (130 years old) inscribed with “Maggie C. Banks Kemptville 1887”.

Maggie turns out to be Margaret Chloe Banks, a daughter of Chester and Ellen Banks from Oxford-on-the-Rideau (lot 19, concession 2, and lot 21, concession 3). She was born in 1864 and died in 1955. Her father started the Banks Livery in Kemptville, located at the corner of Thomas and Asa streets (an apartment complex has been developed on the site). She would have carried and held this book when she was 23. There are even flowers and leaves pressed between the pages. I wonder if she attended the newly built Maplewood School (built in 1875). She had seven siblings, as far as I can see. And her brother Lancelot, the eldest, took over the livery from her father, but was murdered in 1901 (the culprits were found, but got away with the crime).

Lyla married William Meredith Hugill in Toronto in 1921. They may have attended the University of Toronto. They then moved to Winnipeg and attended the University of Manitoba. It appears that they did not have any children. Lyla passed away in 1985 in Winnipeg and was predeceased by her husband (died 1966). (All research shows that Lyla is buried with her parents in Merrickville). There is still a scholarship fund, the Lyla May Guest Hugill Memorial Scholarship for the U of Manitoba for the arts and English departments.

So now the search goes to her brother William. In Lyla’s obituary it states that she had a niece.

William Hastings Guest married Mary Hargreaves Finlayson in or around 1928, but he divorced her in Ottawa in or around 1945 to marry Laura Marie McGee with whom he later had a child. It appears Laura was at the divorce, thus looks like he jumped ship and right into the arms of his new love. There must be quite a story there. Further research shows William passed away in Coburg, Ontario, shortly after the marriage to Laura, so his daughter had to have been born between 1940 and 1947.

Thus the story ends, as current records are still sealed. And no obituaries are to be found. Wouldn’t it be neat to find this niece, or even her children, and hand them this book, a book held by their great grandmother. A book with connections to the little town of Kemptville.

Echoes of Kemptville Past: The conclusion 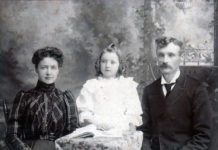 Echoes of Kemptville Past update