“We want to figure out where we are lacking and where we need to provide resources for LGBTQ youth,” Chris says. “We will be entering into a more in-depth conversation with the health centre in October.”

Merrickville-Wolford in Bloom’s Vice Chair, Sean O’Meara, and committee member Mackenzie Salmon have both been instrumental in organizing the drag night at the MUAC. This is the second drag night that Sean has organized in Merrickville-Wolford. The first was at the Goose and Gridiron two years ago and was in support of LGBTQ Lanark Leeds and Grenville after the Orlando night club shooting of 2016.

Chris says the committee is excited to have the MUAC, with a proper stage and larger seating area, to host this month’s drag show. They have four drag queens from Ottawa lined up to be in the show, one of whom, named Kiki Coe, will act as the show’s host. “They are very excited to come out here,” Chris says.

Doors open for the show at 7:30 pm and tickets are $20 in advance, or $30 at the door. The Wick Witch in Merrickville is also having their Fall/Winter launch event that night which ends at 8 pm. In the spirit of community partnership, drag show tickets are half price for those who have a ticket to the Wick Witch event. “I am excited about it,” Chris says. “Ticket sales are going well, and we hope for a great turn out.” 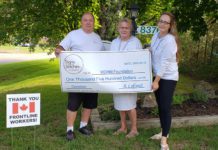 An artistic show of support