Dr. Charles Ferguson was, for many years until his death in 1909, a family doctor living in the large stone house on the corner of Clothier and Rideau Streets in Kemptville. Dr. Ferguson, whose parents emigrated from Ireland around 1830, had chosen Kemptville as the place to start his medical career after qualifying from the medical school at Queen’s University. He married a local girl, Elizabeth Bell, whose family had also come from Ireland and settled in Oxford Station, and whose brother, Robert, was the founder of the Prescott and Bytown Railway.

Dr. Ferguson was extremely well liked in North Grenville, and was a passionate supporter of Sir John A. Macdonald from before Confederation. When the local M.P. turned against Macdonald in 1873, Charles Ferguson went forward as the Conservative candidate in the 1874 election and sat as the local Member of Parliament until 1896. Charles was responsible for having the South Branch dredged to allow boats to travel up to Kemptville from the Rideau Canal, and was repeatedly selected as Conservative candidate unopposed at election time.

Dr. Ferguson was an old-style Tory. The attic of the home on Clothier Street was equipped with a number of beds to accommodate passing tramps needing a place to stay. One man apparently stayed thirteen years, had his life changed completely, and became a preacher. Dr. Ferguson continued to take care of the people of North Grenville into his seventies. In the winter of 1909, he was called out to help a woman about to give birth. Another doctor had refused to go because the family could not afford his fee. Ferguson left his bed, did his duty and returned to sleep. He never woke up.

Dr. Ferguson’s son, G. Howard, went on to be Premier of Ontario, a Conservative, naturally, and Canada’s High Commissioner to Great Britain. 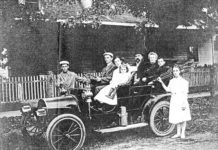