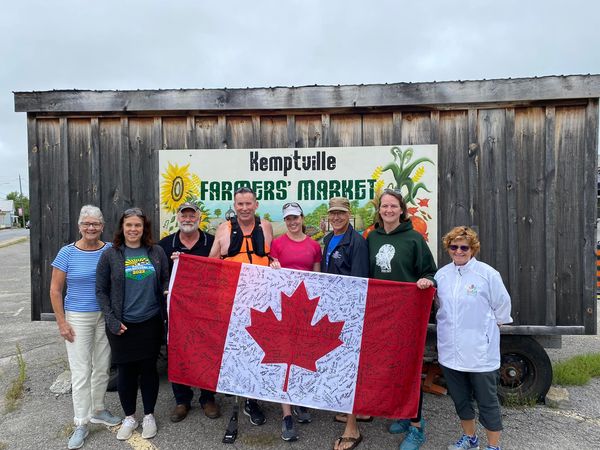 North Grenville was a quick stop on Saturday, August 27 for Clay Williams running in the 8th annual Canal Pursuit for Mental Health Relay. Residents were able to meet runner Clay Williams at the B&H parking lot before he reached his final destination at Parliament Hill. Councillors from North Grenville were among many adding their names to the flag that represented a relay baton.

This 700 km run began with an opening ceremony in Port Severn on August 20. Roughly following the Trent Severn Canal and then along the Rideau Canal, runners will travel in 10 km stretches, stopping in at each of the 88 locks on the way. The goal is to run an average of 80 km per day, allowing time to talk with people along the way, keeping the conversation going about mental illness and health.

The purpose of the Relay Run is to raise funds and awareness of depression, end the stigma of mental illness, and to encourage people to reach out for help. Clay has organized this run relay in honour of his wife, his daughter and his sister who all suffer from mood disorders, and in memory of his two older brothers who took their own lives. At the time of print, $14,040 of the $15,000 goal had been raised.

For more information and to donate visit: www.canalpursuit.defeatdepression.ca