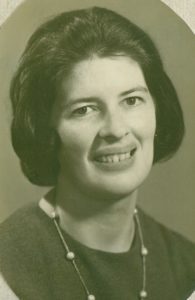 Madeleine McIntosh passed away suddenly Saturday evening July 6th, 2019 in her favourite family room chair. Daughter of Emile Brunelle and Laura Brassard, she was born May 25th, 1937 at Jonquiere Quebec. Madeleine grew up in a large French-Canadian family of 12 brothers and sisters. In 1959 Madeleine married RCAF Flying Officer David McIntosh a young fighter pilot stationed at CFB Bagottville. Madeleine became a military wife and mother, and she lived at many Canadian Military bases in Canada including Bagottville, Ottawa (twice), Toronto, St. Hubert,  Cold Lake (twice), Baldy Hughes; and in Europe notably Zweibruken, Lahr(twice) and Baden. Madeleine fondly remembered the four tours in Germany as her favourite postings while raising her three sons, namely Michael, Stephen and Peter who at one time or another respectively served in the Canadian Army, Navy, and Airforce. Madeleine along the way learned to also speak English and German. Madeleine, or as she liked to be called “ Mado” also worked outside the home and pursued work in administration at a law firm and a dental office, she planted trees in Northern BC, and she served coffee out of the Salvation Army hut to Canadian Army troops while on field exercises in the former West Germany. Lastly, she enjoyed her time as a saleswoman at McIntosh and Watts in the Rideau Centre- especially guiding young brides-to-be in selecting their first fine dining ware sets.  After retiring as a military wife, she spent about 25 years up at Lac Grand north of Gatineau, mentoring and feeding her always hungry grandchildren who delighted in her cooking and warm friendly cottage hospitality. Mado finally made her last move, to Kemptville Ontario, about 6 years ago. Madeleine is survived by her husband Colonel David McIntosh RCAF (Ret.), her three sons Michael, Stephen and Peter, her Grandchildren; Kevin (pre-deceased), Nicholas, Jake, Teghan, Brandon, Jessica, and Jordie, and her Great Grandson Vann. Friends are invited to visit at the Kemptville Chapel of Hulse, Playfair & McGarry, 805 Prescott Street (Kemptville) on Wednesday, July 10, 2019 from 1pm to 4pm.  An informal time of sharing will take place at 3:30 followed by parish prayers.  Interment will take place at Notre Dame Cemetery, Ottawa at a later date. In lieu of flowers donations to the War Amps can be made in Madeleine’s memory.