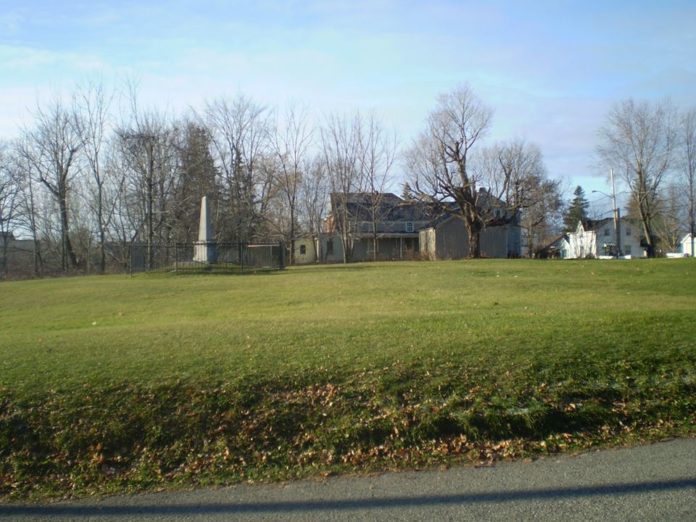 There would seem to be little to say about local cemeteries. But those gravestones contain the names of some of North Grenville’s famous citizens, and, of course, they are the resting places of those who came before us, from pioneers to the most recent losses. But cemeteries are not always the tranquil and restful places you would imagine. In fact, some of them have moved, and more than once, taking their occupants with them.

Some local cemeteries are no longer apparent to the casual visitor, and others are no longer occupied, as far as we know. The first Presbyterian graveyard in Oxford Township was on a half-acre lot on the corner of Bedell and Dennison Roads. In 1834, a wood frame church was built on the lot, and a cemetery was laid out in the corner beside the road junction. Some years later, a new frame church was built in Oxford Mills, and that was later replaced by the current stone structure in 1882. That building is now a private residence. The Presbyterians only sold the Bedell lot in 1895.

By the time the Union Cemetery in Oxford Mills was opened in 1883, there were two Presbyterian graveyards, one at the Bedell site and the other beside the Oxford Mills church. Local historian, Winnie Lamrock, recorded that: “After the opening of the Union Cemetery, 1883, the mortal remains of the early settlers who were buried in the half acre of what is to-day Mr. Currie’s farm, were moved as well as some of the bodies from the Presbyterian churchyard. In 1883 land was purchased for the cemetery south of Oxford Mills. The north side is United and Presbyterian; south side is Anglican.”

When the Oxford Mills church closed and the lot put up for sale, an archaeological investigation suggested that there were still some graves occupied, and the cemetery grounds had to be severed from the building so the Municipality of North Grenville could maintain jurisdiction over the grave sites.

The Union Cemetery in Oxford Mills received, not just the Presbyterians, but also the Methodists who had been buried in the old cemetery on Clothier Street in Kemptville. A Methodist Church on Clothier at James had operated between 1831 and 1869, when the new church was built on Prescott Street. After the original church on Clothier Street was closed, the cemetery that was attached to the old church continued to be used throughout the century. The inscriptions on 98 tombstones in the cemetery were recorded in 1954.

As it became more difficult to maintain the site, the headstones were removed and the obelisk which stands there today was erected, with a small selection of headstones surrounding it, in memory of those early Methodist residents of Kemptville. The oldest graves had stones for Hannah VanBury (VanBuren), who died in May, 1813 aged 57, and an older couple – Eunice and Joshua Purmort. Eunice died on August 9, 1813, aged 70 years and 15 days. Joshua did not outlive her for long: he died on October 6, 1813, aged 67 years and 8 months. So many stories lie under the green grass on Clothier Street.

So, the Union Cemetery in Oxford Mills contains the remains of those who were once interred in Kemptville, Bedell Road, and Oxford Mills. One hopes they have finally found a final resting place! The Anglican cemetery in Kemptville dates from 1829, when residents of the village petitioned the Bishop of Quebec to recognise their new church, informing him:

“That William H. Bottum Esquire has granted to Trueman Hurd, Lyman Clothier Esquire and Abram Beach Gentleman, Trustees for the purposes of erecting a church at the village of Kemptville in the Township of Oxford a piece of land near the said village containing three fourths of an acre more or less to serve as a site for a Church and also as a Burial ground for the inhabitants of the said Township for ever.”

In 1864, an addition to the burial grounds St. James was, apparently, partly paid for by those buried there, who paid $1 “for those who pay pew rents or pay towards the Clergyman’s stipend, and $3 for others”.

The cemetery which is attached to the Roman Catholic Cemetery at Holy Cross Church in Kemptville received its first internment on May 21, 1845. Daniel Farrellly, priest, interred Michael Culletin, farmer of the Parish of Oxford, a native of Ireland. From that day to this, the cemetery, along with all the others in North Grenville, have been the resting place of its residents. There are many others than the ones mentioned here, and all have their stories and memories for those willing to listen.