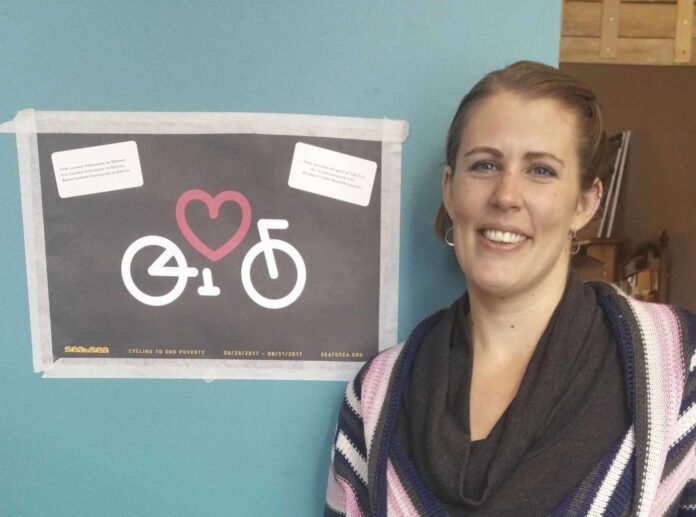 Recently, I started a routine of walking about 6km per day at least three times per week. I was feeling pretty proud of myself until I heard about Karen Luimes and how she plans to spend her summer.

Last year, Karen was talking with her sister-in-law about the possibility of going on a long bike ride. Enjoying any opportunity she gets to go for a bike ride, the mother of five was looking for something a bit more challenging. Remembering that their church was linked to an organization called Sea to Sea (that raises money and awareness for poverty-related issues by doing coast to coast biking tours), Karen’s sister-in-law suggested trying one leg of this cross Canada tour. Upon approaching her husband with her plan, Karen says that he quickly realized that what she really wanted to do was the whole 6,760 km tour from Vancouver to Halifax, and he encouraged her to go for it.

Then something happened that Karen didn’t expect: her son Seth and daughter Eve said that they wanted to share in their mother’s journey. From there, the team eventually expanded to include Karen, her two kids, her sister-in-law, her nephew and a close friend. The team decided to set a goal of raising $38,000, which included a personal goal for Karen of raising $12,000. Karen has raised $5,000 so far, and her two kids have each raised almost $2,000 toward their own individual goals of $6,000. To raise money, they’ve been hosting events like their ‘Spaghetti & Shuffleboard’ night at the First Christian Reformed Church in Kemptville. Karen is also hosting a Paint Night at Geronimo Coffee House on February 1 at 6:45 pm, and a curling fundraiser on March 4 in Williamsburgh.

As for the actual tour itself, Karen will be the only team member who will be doing the whole tour, with her kids riding along for the Vancouver to Ottawa section. Her sister-in-law and nephew will be riding from Vancouver to Winnipeg, and then her friend will be joining in for the Ottawa to Halifax portion. The tour will last a total of nine weeks, averaging just over 105 kms per day. Depending on the terrain, the tour may do only 60 km in the more demanding mountain sections. The team is part of a larger group of sixty participants, with fifteen riders committed for the whole tour. Sleeping in tents will be one of the most challenging parts of the tour, but having a support team of first aid-trained volunteers following behind in a car, and a truck to carry their equipment, is very reassuring said Karen. Team ‘Exselldragonflys’ has already started their training for the June 26 launch in Vancouver by logging at least one hour per day, six days a week, since September.

Karen is incredibly grateful for the support she’s received so far, both financially and morally, from her friends, family and her church to allow her to participate in this incredible experience. If you’d like to donate, you can go online to www.my.seatosea.org.org/Karen or, drop off a cheque or cash at Geronimo Coffee House; or email [email protected] to find out the details of one of their fundraising events. They’ve also got a Facebook page, “Exselldragonflys” where you can find out the latest info and see their blog, which they’ll update during their tour. If you’re interested in sponsorship, they’d be happy to hear from you. A quarter of all the children in Canada live below the poverty line. Half of all First Nation children live in poverty.

Karen wants to assure people that this is no vacation that she’s asking people to contribute to. This will be a gruelling, daily grind for nine weeks that she figures will push her to physical, emotional and psychological limits. When asked about what she’s most looking forward to about the tour, I suggested that it might be the end of the tour in Halifax on August 31, but Karen quickly responded that what she’s looking forward to most is the stop in Ottawa, which means she’ll get to see her family and sleep in her own bed for one night. I’m sure that, if each one of us had spent a few thousand kilometres riding across Canada on a bicycle, we’d probably feel exactly the same way when we got to Ottawa. The only difference is that Karen knows this before she’s even started. To me that says a lot about the person whose primary motivation for doing this is to help others.