North Grenville Council has agreed to renew its contract with Allegiance Transportation Services (ATS) to provide accessible transportation in the Municipality.

This partnership was originally forged when North Grenville Accessible Transportation (NGAT) asked the Municipality to take over the accessible transportation service in the Municipality back in 2019. NGAT was a volunteer-run organization that had been providing service to the community for over 20 years. “At the end of the day they were getting a little bit burnt out,” Economic Development Officer Matt Gilmer told Council at the meeting. “It was time that somebody else took it on, and here we are.”

The total budgeted amount for the 2020 contract with ATS was $101,000 with an expected $51,400 coming from user fares and other funding including a United Way grant. Due to COVID-19, ATS and the Municipality made the decision to suspend all non-critical transports from March to September. This caused a dramatic decrease in fare revenue which is estimated to be down 70% by the end of the year. The United Way also had to shift its programs due to COVID-19 which resulted in the Municipality not receiving the anticipated $15,000 grant.

Despite a difficult year, ridership is on the rise. Matt told Council that in January that ATS had about 71 people using the service and while this number dropped to zero in March and April, it is slowly coming back up with 15-20 users in August and September. “In November and December, we had 20 people using the service,” he said. Since mid-September, ATS has been operating at full service levels and estimates that its numbers will go back up to pre-COVID levels early in the new year.

The cost of the new contract with ATS for 2021 is $101,700 reflecting increased cost of living. ATS is expecting to collect about $25,000 from fares and will be depending on funding from the Province to help cover costs. In 2020, it did receive some funding from the gas tax, which the Municipality is automatically eligible for because it has a transportation service. However, the amount is based on population and ridership which, as previously mentioned, is down significantly. “In discussions with the Province we are definitely not alone,” Matt told Council. “Every single city and every single municipality that’s offering a transit system is hurting.”

Because of this, Matt believes that there will be some funding from the Province available to help municipalities with transit service costs in 2021. 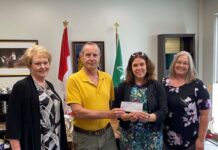 Lions at work in our community