The Municipal Council have been requested to change the zoning of the former North Grenville District High School to allow for a commercial hub to be created in the building in the future. The proposed Zoning By-law Amendment changes the zoning category to Downtown Commercial, which permits a variety of commercial uses, including retail, office, restaurants, spas, personal service shops, places of entertainment and recreational establishments. 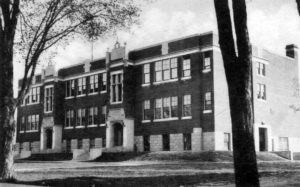 The Downtown Commercial zone also permits residential uses on the upper storeys. Although residential units are not currently planned for the renovation of the former high school, the proposed zoning would permit this use in the future.

Members of Council expressed concerns about the proposed plans for the site, as there are  environmental issues which need to be addressed regarding the presence of asbestos as well as structural questions. Deputy Mayor MacManaman and Councillor Strackerjan emphasised the need to take those concerns into account when deciding on future uses. Councillor Strackerjan also sought clarification regarding any heritage designation applying to the building, as well as the status of the Cenotaph which stands in the front grounds of the former school.

There was some unease expressed as to how the current owner of the building had begun planning for commercial operations without the municipal staff being involved in consultations on the proposals. The fear was that other commercial operations would find themselves locating to a site that would require serious renovations, or have issues with zoning and use. In the end, Council agreed to the zoning change with some reluctance, and requested staff to keep a close eye on future activities on the site.

The change in zoning was designed to allow future commercial development of the building, although there is no immediate intention to introduce more tenants. At this time, there are no proposals to expand the building beyond its existing footprint.

Council delays approval for expansion of the South Gower Pit