At their regular meeting on July 16, North Grenville’s Municipal Council appointed members to seven advisory committees. This is in addition to the Mayoral Task Force on Affordable Housing struck in January, and the Community & Economic Development Advisory Committee convened in April.

“On behalf of Council, I would like to extend our appreciation to all those who expressed an interest in contributing to our community by playing a role on a Committee. In addition to the community members appointed by Council to each committee, Council has created the capacity for each Committee to include designated representatives of relevant organizations and advisory experts who have particular knowledge and interests. This will ensure each Committee and Municipal Council as a whole will benefit from a diversity of views and perspectives,” said Mayor Peckford.

According to the newly established Terms of Reference for all Municipal Advisory Committees, there are a maximum of two elected representatives of Council on each Committee. Chairs and vice chairs will be selected among those community members appointed to each Committee and Council representatives will not be eligible for these roles.

The appointed members, including Council representatives are as follows:

Now that the appointments have been made, the committees will convene in the near future. Meeting dates, agendas and minutes will be posted to the Municipal website as they become available. Committee members and Terms of Reference are also available on the website at www.northgrenville.ca. 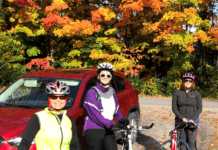