Another year, another award for Cory M. Coons, well-known musician and writer. The International Entertainment and Music Association [IMEA] has named Cory as Adult Contemporary Artist Of The Year for 2019, and his song, “Would You Stay”, has been named Adult Contemporary Song Of The Year.

It is a remarkable achievement for the local artist, as this is only the latest in a string of awards he has picked up for his songwriting and performance over the past few years. Cory was nominated at the “Producer’s Choice Honours”, in the “Rock Artist Of The Year” category for 2015, and was the 2014 recipient of the Producer’s Choice Honour for “Studio Album Of The Year” for his E.P., “Share A Little Time”. Cory’s influences are a collection of various genres like Melodic Rock and Roots-Rock, blended with previous hints of Country-Rock, and all of these sounds come through his music. He is a respected Guitar teacher at Rock My House Music Centre in Kemptville.

The man has a growing track record (two puns for the price of one!), having opened and performed alongside such legendary Canadian artists as April Wine, Kim Mitchell, Glass Tiger, and David Wilcox.

The awards ceremony will take place in Kentucky later this year, though Cory is unsure whether he will actually make it to the event in person. 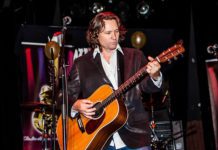