Kingstonian, Anne Redish, will discuss her multiple archaeological experiences as a dig volunteer to begin the second year of public lectures sponsored by the Rideau Valley Archaeological Society, Sunday, September 8, 12:30 pm at the Goose and Gridiron in Merrickville.

Most recently, Ms. Redish participated in this summer’s dig beneath St. Paul’s Parish Hall in Kingston, Ontario. From the metre-deep disturbed soil in the crawl space, many cultural artefacts and bones (human, mammal, and avian) were brushed from a portion of the Lower Burial Ground established in 1783. In August, she dug in Gatineau’s Leamy Lake Park. The NCC-led investigation is on the largest pre-contact archaeological complex in the Outaouais, occupied as far back as 2,500 years.

Her past experience includes excavation at the Fortified Village, 1700 A.D., at Blackfoot Crossing Historical Park, a complex of historic sites on the Siksika Reserve in Alberta. Earlier with the then-active Cataraqui Archeology Research Foundation, she dug into the grounds of what is now Canada’s Penitentiary Museum at the 1873 Warden’s Residence, and the first huts occupied by the officials and workers during the construction of the pen in the 1830s.

The RVAS meetings are open to everyone, and begin with lunch. Membership is not required, but the purchase of a $20 membership would be appreciated.

Planned for coming months are an active experience with Ground Penetrating Radar on a local site, a demonstration with try your hand at flint knapping, and an illustrated talk on the delta-wing test vehicle recovered from Lake Ontario, perhaps related to the Avro Arrow.
The Rideau Valley Archaeological Society is on Facebook. 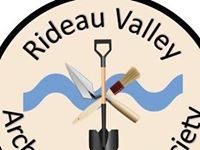 Making a point with arrowheads 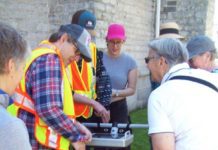