The North Grenville community stepped up to the plate in the past weeks to support a fellow resident in a big way. Fiona McKenney has been in severe chronic pain for the last eighteen months. Over the past few months, it was getting progressively worse, to the point that she couldn’t stand up for more than 15 minutes at a time. “Some days, my husband had to carry me out to the car,” she says.

Fiona has gone to many doctors and specialists to try and address her pain. She has been to the chiropractor, done physio, and tried desperately to lose weight, which many healthcare professionals have said is essential for her to heal. Fiona felt dismissed by many doctors who told her that there was nothing wrong with her and shamed her for not being able to lose weight. “They just said it’s because you are fat,” she says. “It got to the point that I was thinking how many pills would it take to not wake up tomorrow.”

Thankfully, Fiona finally found an RMT and chronic pain specialist in Cornwall who had a different approach. After just three treatments, she has already seen an improvement in her pain. He also referred her to a naturopath in Toronto, who will hopefully be able to address the underlying reasons that she was having so much trouble losing weight, which is still important for her recovery. “The naturopath related it to an underlying issue in the gut fauna,” she says.

Although this new treatment plan was giving Fiona a lot of hope, there was also the underlying stress of how she was going to pay for it. None of her treatments are covered by OHIP, and with everything she needed, from custom orthotics, to special boots to stimulate blood flow in her legs, and trips to Toronto to see the naturopath, she was looking at a bill of $10,000 to $15,000. In order to pay for her medical expenses, her husband started working long hours seven days a week at their automotive shop, and her daughter even offered to use her college fund to help pay her medical bills. “There was definitely the fear of how we were going to pay,” Fiona says.

Despite her health issues, Fiona is an active community member and is on the board of Kemptville Pride. Before one of their zoom meetings a couple weeks ago, Fiona was telling fellow board members Devon Warren and Malina Dockendorff about her new treatment plan, and when they asked how much it was going to cost, she told them. “I started messaging Malina privately, saying – what can we do?” Devon says.

Malina and Devon decided to set up a bank account and a Facebook group called Fundraiser for Fabulous Fiona to try and raise as much money as they could to help Fiona pay her medical expenses. “Fiona has been suffering from undiagnosed pain for years,” Devon wrote in the Facebook group. “No matter how much pain she is in, she would be the first person to come to anyone’s rescue if they asked her to, or even if you didn’t specifically ask. You tell Fiona something is wrong, and her first response is “how can I help?” Now it’s our turn to return the favour.”

Devon found that as soon as they set up the group it spread like wildfire. “My email was blowing up every two seconds with e-transfer after e-transfer,” she says. Many local businesses either committed to matching dollars up to a certain amount, or donated items to be raffled off once they hit a different donation goals. They were also able to put together an online auction with items donated. Devon was hoping to be able to raise $10,000 by Fiona’s birthday in August, but the community was able to hit that goal in only six days. “I’m still shocked that it happened,” she says.

On Wednesday, June 10, Devon and Malina told Fiona they were coming to decorate her house for Pride, but instead they handed her a bank card, giving her access to the $10,000. They also organized a parade of cars which drove by Fiona’s house to show their support. “It’s called karma, and it’s paying you back ten-fold for all of the stuff that you do for everybody else,” Devon said when she handed Fiona the card.

Fiona was in shock when she heard how much money the community had raised for her. “They floored me with an obscene amount of money,” she says, adding that she still doesn’t believe she deserves it.

Fiona has since been included in her fundraiser Facebook group, and is touched by all the beautiful messages people left about her on the page. “It took me hours to read the page, and it had me in tears,” she says. “I’m not surprised that the community did this, but I am surprised they did it for me.”

Devon says that, just because the cat is out of the bag, it doesn’t mean the fundraiser is over. She would love to see even more donations come in to make sure all of Fiona’s medical expenses are covered, and maybe a little extra so Fiona can do something fun with her family. “Even if we raise more than she needs, she could go on a vacation,” she says. “We see that as therapy as well.”

All donations can be sent via e-transfer to [email protected]. 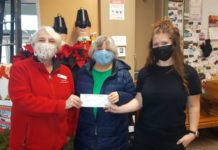 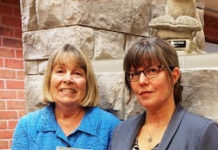 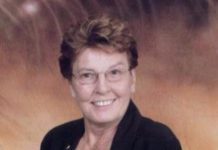