The collection was stored at the College and, after the University of Guelph withdrew from operating the institution, the memorabilia remained stored in the College under contract with the Alumni Association. A new building is being erected at the Lombardy Fairgrounds to house the collection, and to be the location of future Alumni gatherings. The Association would like to regain possession of their memorabilia in order to complete plans for the new building.

However, the Ontario Ministry of Agriculture Food and Rural Affairs [OMAFRA], who have possession of the collection, have not yet returned the material to the Association.

Recently, North Grenville CAO, Brian Carré, issued a press release about the matter, claiming that: “When the sale of the property was being negotiated, ARIO’s position regarding ownership was that any campus artifacts and memorabilia which were produced, gifted, printed or in use as part of the operations and programming of the College were owned by the province (ARIO) and therefore considered to be chattel assets that were transferred to the Municipality as part of the sale”.

In effect, Mr. Carré’s position is that possession is nine-tenths of the law, or, in other words, we have possession, therefore the collection is ours. Anything the Alumni own, he says, they already have in their possession, so they have no claim to everything else. He has announced that the municipality will engage to have an Archive Conservationist prepare the artifacts for display, as they will “remain on-site and be displayed for the benefit of the greater community, as they represent a significant contribution to North Grenville’s history”.

Mr. Burgess told the Times last weekend: “Our position remains unchanged. The province of Ontario, without consultation, and despite our efforts to advise they were in possession of private property, transferred such private property to a third party. The province is now being taken to court on those grounds. The Municipality of North Grenville, being the third party, are, until proven otherwise, in possession of private property and have no authority to make any decision or announcement with regards to their plans for this property. Mr Carré and Ms Remillard [hired by the Municipality to supervise future arrangements for the College lands] are to be held responsible for the safety of and safe keeping until such time as we go to court.”

In spite of the soothing reassurances of Mr. Carré in his public statements, this issue is not yet resolved, and will find the Municipality in the Ontario courts to answer for their role in the dispute. 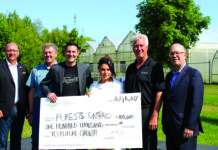