The impact of the recent North Grenville Rural Summit continues to be felt, and not only in the municipality. Elsewhere in this issue you can read the statement made to the Ontario Legislature by MPP Steve Clark, one of the many political and agri-business people who attended the event on April 7. In addition to the organising committee, Steve paid special tribute to Councillor Jim Bertram, the man whose drive and vision made the Summit possible. Jim has been working, ever since he was elected, to bring about a greater awareness of the needs, issues and concerns of the rural community, as well as the potential economic and social benefits that attach to agri-business generally. Steve Clark referred to him as “a true champion of rural Ontario”, and it was a shame Jim had to miss the event. But fighting for your life against aggressive cancer is a far higher priority for anyone.

But, thanks to the work Jim and the others on the organising committee put in over the past months, the overall response to the Summit has been universally positive, and there is now a hope that we will see a permanent committee, or some other form of rural affairs oversight, at the municipal level. Jim Bertram was part of a team that included Deron Johnston, Jim Beveridge and Donovan Arnaud, and even a cursory glance at the list of sponsors, business supporters and the suppliers of food and beverages, shows just how much of a community event it was.

This is National Volunteer Week, and the Summit was another in a very, very long list of activities taking place in our community that depend on volunteers for their success. Without volunteers, and the support they receive from local business, this would be a much poorer place in terms of quality of life and care of our neighbours. The attendance and public participation in the Summit shows how much residents and business care about rural issues, and how great is the potential for further growth in that field (not a pun!).

However, we can’t be sure that the all of the current council will take advantage of the positive energy left behind by the event. There was clear resistance to the very idea of the Rural Summit at the municipal level. Jim Bertram was on the point of investing his own money just to make it happen, and, although the municipality provided a $5000.00 grant for the budget, which amounted to about 33% of the total, it was reluctantly given. This should not have been the case, as such an event is clearly laid down in the Municipality’s Strategic Plan.

At the Council meeting following the Summit, positive remarks were made by the Mayor, the CAO and Councillor Tobin: yet not one of them mentioned their colleague, Jim Bertram’s name. Councillor Arnaud at least indicated that the success of the Summit would lead to future events, and declared that “this is the beginning of something much greater”. Donovan Arnaud had stepped in to fill in for Jim Bertram after Jim’s health required him to take a leave of absence from his municipal duties. His remarks were positive and welcome.

The remarks of CAO Brian Carré were concerned entirely with the takeover of the campus by the municipality, his favourite subject these days. Apparently, the Rural Summit somehow proved how correct the municipality was to take over the property. It was, he said, “a testament” to the decision of the municipality. Without mentioning Jim Bertram’s role in the Summit, Mr. Carré said that “it was an afternoon that certainly made us feel good about the fact that we have acquired the campus”. It’s a pity there was not more support for Councillor Bertram before the event, and some recognition of his role afterwards.

Councillor Onansanya was not present at that meeting. Mayor Gordon then launched into a most surprising and rambling speech about what he termed the “disease” of human trafficking in Ontario. He blamed it all on the “politically correct atmosphere in Ontario”. Given the other serious issues facing North Grenville, I doubt that human trafficking is one of priorities our municipal council need to be dealing with these days. The mayor did then move on to mention the Rural Summit in one sentence, again with no mention of Jim Bertram.

I don’t know, but to fail to mention a colleague then in hospital fighting for his life, while at the same time taking pride in the event that he had promoted and they had resisted, seems just a little lacking in class. Perhaps they need to admit, if only to themselves, that they have been negligent of the needs of this community, while one of their members, in spite of health problems, put together a team of residents and provided North Grenville with an event worthy to be brought to the attention of the provincial legislature. Small-minded and petty. Time for a changing of the guard.

Best wishes to Jim, and congratulations to Deron Johnston, Jim Beveridge and Donovan Arnaud, as well as the many individuals and businesses in the region who made this event such a success. 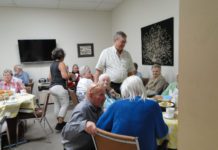 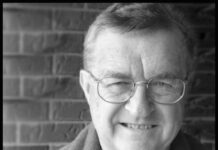