Greetings! I am writing this article as a proud member and Councillor of the Henvey Inlet First Nation (HIFN). While I am currently a member of the HIFN Council and an active member of my community, for much of my life I was denied official recognition of my status as an “Indian.” Until I was in my 50s, I was denied entitlement to be registered as an Indian because, in 1929, my father made the difficult decision to accept “enfranchisement” in order to be able to vote in federal elections at the age of 22.

Many of you may be aware of the government’s enfranchisement policy, and the adverse effects that enfranchisement had for individuals who were subjected to this racist policy – but I have lived it. It was only in 1999 that, for the first time in my life, my Indian status was finally recognized by Canada. Since then, I have returned to my community of Henvey Inlet and have been actively involved in the life of my community, including as a member of Council. During my first term on Council from 2013 to 2015, my portfolio was Day Care, Health and Social. During my second term, from 2021 to 2023, I am currently responsible for our Lands portfolio. Prior to being elected as a Councillor, I worked as the Lands Assistant for four years.

I am writing this article today to make readers aware of a legal claim that I am working on, with the support of the Henvey Inlet Chief and Council, to force Canada to finally eliminate the ongoing discrimination suffered by people like me and my family, who continue to endure the discriminatory impacts that flow from enfranchisement. Because my father was enfranchised, although my Indian status has been reinstated, I have only been granted what is called 6(2) status and, as a result, cannot pass that status on to my children. Someone in the exact same situation as I am in, who did not have a parent who was enfranchised, would be able to pass Indian status on to their children. This is fundamentally unfair! We believe that it is also contrary to s. 15 of the Canadian Charter of Rights and Freedoms and must be corrected.

We have successfully obtained some funding to help us pursue a legal claim aimed at finally eliminating this ongoing discrimination. We are working with Westaway Law Group, a law firm based out of Ottawa that specializes in Indigenous legal issues, to draft this claim and to pursue a legal remedy in court. While I feel that my own personal claim is strong, we are also hoping to identify other Anishinaabe people who may also be suffering the continuing impacts of enfranchisement.

Others have a parent or grandparent who was enfranchised and forced to give up their Indian status in order to vote, or to join the army, or to attend university. We would like to be able to show the Court that the effects of this government policy are not restricted to a few people, but we hope to demonstrate that the government’s enfranchisement policy continues to have negative impacts on a large number of individuals from a variety of Anishinabek communities. Although this is an issue that impacts individuals and their families, it has also impacted our communities. I suspect that there are many individuals, like myself, who have been denied their Indian status and the opportunity to become active and contributing members of their First Nations. The ongoing effects of enfranchisement need to finally be challenged and brought to an end. We need to work together to ensure that all those who have been denied recognition as Anishinaabe due to Canada’s discriminatory policies finally get the recognition that they deserve.

[With thanks to the Anishinabek News] 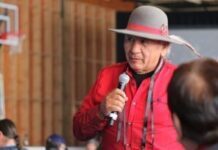