Trustees from the Catholic District School Board of Eastern Ontario attended the 91st Annual Ontario Catholic School Trustees’ Association (OCSTA) Annual General Meeting, which was held virtually on Saturday, May 1. Attended by delegates from across the province, the event provides a forum for the election of regional representatives to the provincial board, and to acknowledge and honour the service and commitment of Ontario’s Catholic school trustees.

At the meeting, Catholic District School Board of Eastern Ontario Chair Todd Lalonde was elected to a fourth term as the OCSTA Regional Director for Region 10, which includes the CDSBEO, the Algonquin and Lakeshore CDSB, and the Renfrew County CDSB. Chair Lalonde will serve in this position for a two-year term.

“I have served in the role of Region 10 Director on the OCSTA Board of Directors for three consecutive terms, and I look forward to serving for a fourth term. I feel blessed to have had the opportunity to represent trustees and students across Eastern Ontario, and I am extremely grateful for the support that has been provided to me. Being part of the OCSTA team has been an enriching opportunity, and I graciously look forward to continuing to serve in this role.”

Chair Lalonde is currently serving his fifteenth year as Catholic School Board Trustee with the CDSBEO. “I am pleased to acknowledge with gratitude all the candidates who stepped forward to serve the mission of Catholic education at the provincial level as an OCSTA Regional Director. The newly acclaimed and elected trustees take on a responsibility to serve the best interests of students and the priorities of Ontario’s publicly funded Catholic schools. We welcome their commitment and support for the important work we do as part of Ontario’s successful education system,” said OCSTA President Patrick Daly. 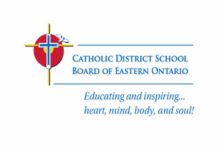