Over the past two weeks, the North Grenville Fire Service has responded to calls dealing with two grass fires that started out as small fires set by residents. Both fires occurred despite the Municipality having a burn ban in effect. Just last week they decided to lift the burn ban, but due to the cause of the most recent fires, it wouldn’t have mattered whether the burn ban was in place or not.

In the evening of Monday, April 24, the NGFS was alerted to a burning field near Bishop’s Mills by a passing motorist. The NGFS responded quickly and was able to extinguish the fire before it spread to any of the surrounding properties, or damage the home beside where the fire was started.

Deputy Fire Chief, Randy Urslak, said that the property owner started the fire to burn some dead vegetation along the fence of the property beside the house (despite the burn ban being in effect). The homeowner then decided to go inside their home “for just a minute”.

Leaving a fire unattended, or getting distracted by doing something else while burning, can result in this type of problem, says the Deputy Fire Chief. “I’ve seen it too many times. People walk away from a fire, or go inside their home for a coffee, and then come back out and an entire field is in flames”. These same people don’t seem to remember that there are often other homes and properties close by. When people get distracted, the fires can become a threat to their neighbours and their properties.

Another similar incident happened a week before in Burritt’s Rapids. Apparently, people think that because the ground is soft or wet, that a fire can’t spread. The fire doesn’t burn the soil though, it burns the dead grass and vegetation that stands above the wet ground. This is a common misconception that the Deputy Chief says leads to fires like this every spring, and some people don’t learn until it’s too late.

The NGFS’s greatest concern is for the safety of people during these situations, said Randy. “Our first priority after that is people’s homes”, which is often the most valuable, and sometimes only, asset that people have. People sometimes have other buildings too like garages, sheds, barns and workshops.

After attending the fire investigation training that took place recently, and reported on by the North Grenville Times, I saw firsthand how things in a home or workshop can catch on fire, and how quickly they can burn indoors. When you start a fire outdoors, it’s a whole different ball game. Factors like wind and weather can result in escalating the effects of a fire.

When asked why he thought people ignored burn bans, or got distracted from fires that they set, Deputy Chief Urslak said that he doesn’t really understand it, he just knows that every year the NGFS gets called to fires that are set deliberately, left unattended, and cause thousands, and occasionally millions, of dollars in damage. Always check with the Fire Service before starting any fire, and make sure you have an up to date Burn Permit. Call Telephone: (613) 706-1770 before burning, and get a burn permit on-line at www.ng.burnpermits.com. 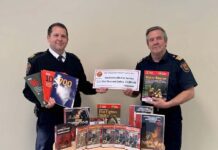 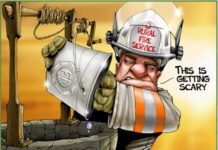 Recruitment an issue for the Fire Service