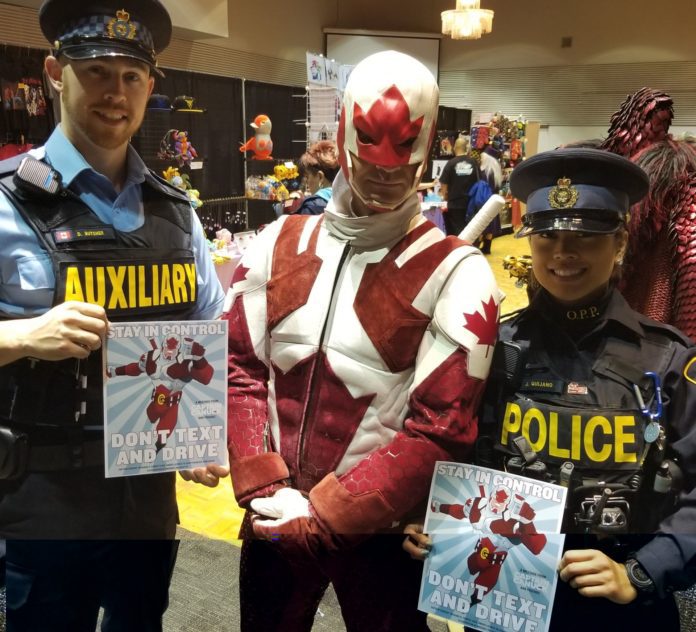 OPP Highway Safety Division’s Operational Support Supervisor, Sgt. Clayton Brown is very aware of the dangers when young inexperienced drivers are distracted while behind the wheel. So, in the fall of 2017, Brown took on the task of coming up with a traffic safety message targeting young drivers in an innovative way.

While attending a comic book show in Mississauga, he met Richard Comely, one of the creators of iconic Canadian Superhero, Captain Canuck – a reboot of the classic true north comic book hero created in 1975. Discovering Richard’s brother was an OPP officer, and being a comic book fan himself, it wasn’t hard for Clayton to strike up a conversation. That meeting led to the creation of a youth traffic safety initiative to reduce distracted driving specifically by younger drivers. The idea was for a Captain Canuck poster that could be shared at upcoming large community engagements such as Comicon and Fan Expo.

“My intention was to come up with a new way to connect and engage with young drivers with this traffic initiative to make our roadways safer and hopefully save lives,” says Sgt. Brown.

Working with his supervisor and OPP Corporate Communications, he produced the traffic safety poster to capture the interest and attention of younger drivers and hopefully influence them to put down their phones while driving. Armed with the poster and the Captain Canuck suit, the OPP have participated at the Comicon and Fan Expo 2018 events at no cost to the OPP thanks to the support of the event organizers and various partnerships to promote safer roadways for everyone.