Canadians living with dementia are going public for a third consecutive year in an effort to change hearts and minds and tackle the ongoing discrimination they experience in their day-to-day lives.

“When did it become a crime to forget something?” asks Manitoba resident, Tanis, a former nurse living with vascular dementia. “I want to get the word out that it’s nothing to be ashamed of, let’s get rid of that stigma so that people can talk about dementia and get the help they need.”

Tanis is one of many Canadians who are courageously stepping forward with their personal stories in the Alzheimer Society’s nation-wide campaign, “I live with dementia. Let me help you understand”, launched Monday, January 6, as part of Alzheimer’s Awareness Month.

Spurred by alarming research indicating that 1 in 4 Canadians would feel ashamed or embarrassed if they had dementia, the campaign gives a voice to Canadians with dementia who are frustrated by the constant assumptions and misinformation associated with the disease.

“Unless you have experienced it firsthand, it can be difficult to appreciate the damage stigma can do to individuals and families facing dementia,” says Pauline Tardif, CEO, Alzheimer Society of Canada. “Too often, negative feelings, attitudes and stereotypes surrounding dementia dissuade people from seeking help and discourage others from lending their support. By providing a platform for Canadians to share their stories, we can cultivate empathy and compassion and help break down the stigma so that Canadians with dementia can live a full life.”

Since the launch of the campaign in 2018, over 65 Canadians with dementia, including caregivers, have taken a stand against the stigma associated with the disease.
Joining Tanis in this year’s campaign are:

Leonard, a retired business professional from Ontario, who was diagnosed with Lewy body dementia four years ago at age 69. “You can be afraid, but it won’t help. It adds nothing. So, to the extent I can, I’m going to continue to live my life in ways that look like how I’ve lived before.”

Ken, diagnosed with young onset dementia at 58, and his husband Mark, a retired nurse, live in B.C. and have been passionate gay rights activists all their lives. Now, they want to “out” dementia and normalize the disease. They know firsthand how shame and disguising symptoms can undermine relationships.

Carol-Ann, a committed advocate for dementia in her small-knit community in Alberta, cares for her husband Stan at home. He’s slowly declining since he was diagnosed with mild cognitive impairment 10 years ago at age 70. “It really hurts to hear disparaging comments. People with dementia are not crazy, they’re not losing their minds.”

Amy, a personal support worker based in Ontario, not only encounters stigma in her profession, but also sees it in her personal life since her father-in-law was diagnosed with Alzheimer’s disease. “We need to take dementia out of the shadows […] education is a huge part of understanding.”

Harold, 71, a proud Newfoundlander who never minces his words, is constantly fighting the insensitive remarks about his wife Barb of 50 years, who has dementia and lives in long-term care. “People say, ‘She doesn’t seem that bad, you’d never know she had anything wrong.’ It might be well meaning, but it makes you question yourself that maybe it’s not all that bad—but it is.”

Lyne, an HR professional from Quebec, never imagined she would have to move her 63-year-old husband Yves into long-term care following a diagnosis of Alzheimer’s. “The lack of understanding and fear of Alzheimer’s creates discomfort and sadness, against which people stay focused on their own pain. People tend to walk away and forget about us. We feel isolated.”

To read these and other stories and find out how you can help in the fight against stigma, visit the dedicated campaign website at ilivewithdementia.ca. The site also features practical information and downloadable materials, including key myths and facts about the disease, as well as social media graphics to help spread the word about the campaign. Visitors to the site can also connect with their local Alzheimer Society for help and support.

Through a host of programs and services, advocacy and public education, Alzheimer Societies across the country are there to help Canadians overcome the challenges of living with Alzheimer’s disease or another form of dementia. The Society also funds research to improve care and find new treatments and a cure. The Alzheimer Society Lanark Leeds Grenville offers Education, Support, Adult Day Programs, Weekend Respite, Minds in Motion, Blue Umbrella/Dementia Friendly Training, Words of Wisdom and Brain Booster programs.

“The number of Canadians with dementia is soaring” says Pauline Tardif, “so this is an extremely important campaign to pause and think about our attitudes and perceptions and build a more accepting and inclusive society for individuals and families living with dementia.” 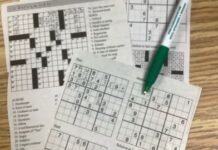 When it comes to brain health, it’s not just about puzzles

Why visit Dementia patients after the memory is gone