Frank not only made a personal donation, but also got his staff involved in raising money and food for the Salvation Army. Through contests and games, which included several prizes, the staff raised $880 in the month of June. They also held a food drive, where they collected around 200 lbs of nonperishable food items for the food bank. “I was impressed with how much we raised,” Frank says.

Wanting to build on the momentum and get the community involved, Frank now has a wooden play castle, made by Calvin, in the lobby of Canadian Tire. He is asking people to drop cleaning supplies, toys, and pet food in the castle to be donated to the Salvation Army. “People are already dropping things in it,” Frank says, adding that the entire floor of the castle was covered on Friday. “It’s really nice to see.”

The castle is also being auctioned off at the end of August, when the drive is over. It will go to the highest bidder in the silent auction, which can be accessed through the courtesy desk in the store. Frank has also offered free delivery, if the winner lives in North Grenville. Canadian Tire will also be continuing their in-house fundraising to support the Salvation Army food bank. “The Salvation Army is very appreciative of the partnership with Canadian Tire as we work together to bring families in need a happy summer in the midst of difficult times,” Calvin says.

With all of the food from their Christmas drive gone, the Salvation Army food bank is depending on donations from individuals and businesses to support those in need in the community. To donate, you can go to www.salvationist.ca, and choose Kemptville, Ontario, to make sure your donation stays locally. You can also come by their office in Kemptville at 2 Oxford Street to make a donation. 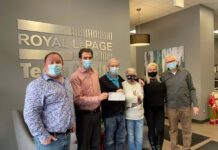 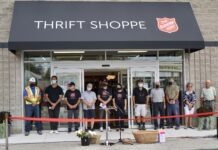