Prime Minister Justin Trudeau acknowledged the discovery of the bodies of children found at the site of one of Canada’s residential school sites in unmarked graves, and called it a reminder of the dark history of Canada. He himself may also be relegated to star in one of the dark chapters of Canada’s history as he continues to litigate against Indigenous children and survivors of residential schools.

In 2007, the Assembly of First Nations (AFN) and the First Nations Child and Family Caring Society (FNCS) filed complaint with the Canadian Human Rights Commission (CHRC) alleging that Canada is racially discriminating against First Nations children by providing less child welfare funding for children on reserves than it provides for other children. In 2008, the Auditor General of Canada found that this was true, and that Canada was not funding children equally and was discriminating. That same year, the complaint was sent to the Canadian Human Rights Tribunal. Canada, then under the governance of the Harper Conservatives, appealed to the Human Rights Tribunal and said it was not guilty of discrimination.

In 2009, Canada filed an application to derail the Canadian Human Rights Tribunal, arguing that the CHRT does not have jurisdiction as “funding is not a service.” After many legal hurdles and obstacles the FNCS faced in its quest to have Canada fund First Nations child welfare systems equitably, finally, in 2016 the CHRT found that the Canadian government is in fact racially discriminating against 165,000 First Nations children who are in care.

By 2018, three years after Justin Trudeau became Prime Minister, Canada was faced with its 8th non-compliance order for failing to uphold the rights of Indigenous children in the child welfare system.

This year, the First Nation Child Caring Society is still fighting for redress, because Canada is still not complying with CHRT orders and is not taking sufficient measures to cease its discrimination under the FNCFS Program with respect to First Nations children and families receiving services from agencies. Canada is using millions of tax dollars to pay for legal fees fighting against a call to equitably support Indigenous children in state care.

Cindy Blackstock who is the Executive Director of the FNCS, and who has been the indomitable spirit moving this fight forward, will be in court with the Canadian government again on June 14. Cindy asked about Prime Minister Trudeau, “How much does he think a child’s life is worth?” 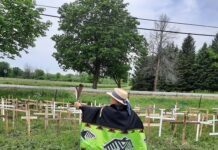 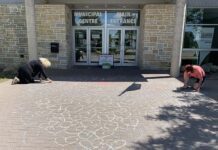 Hearts for Indigenous children in Kamloops