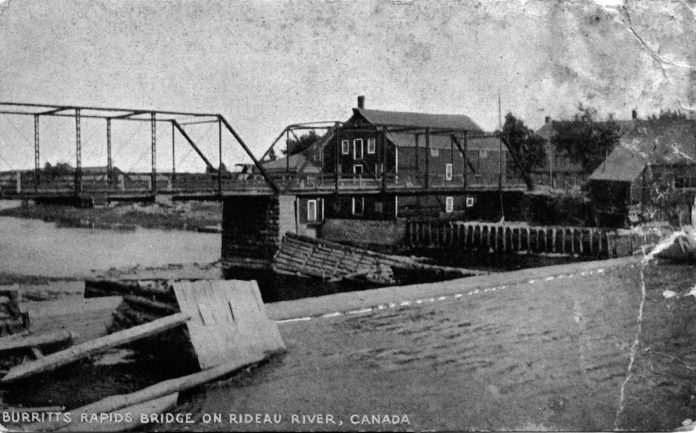 The photograph dates from around 1905 and shows the rapids which gave the village its name, along with the mills which gave it its foundation. The village on the island was literally made by the Rideau Canal. When the canal works went through the land where the Burritt family had been settled since the 1790’s, a channel was cut to allow the canal to divert around the rapids, forming an island between the river and canal upon which the main section of Burritt’s Rapids developed. In addition to the new island, a high-level bridge was built very close to where the present bridge crosses the Canal to the island. Twenty-eight feet high, it was designed to allow large vessels to pass underneath as they plied the waters of the new Canal. One of the earliest settlements on the Rideau, Burritt’s Rapids grew around the canal, the mills situated on the river, and a divided identity – part in Oxford-on-Rideau and part in Marlborough Township. For decades, it was a thriving, prosperous place, a busy stop on the Rideau with stores, schools, churches, and hotels: a bustling and lively place. The famous Rideau steamers plied between Montreal and Kingston, collecting freight and passengers in Burritt’s Rapids as they went. Bypassed by the railway, with the decline of traffic on the Rideau Canal, the village gradually diminished in size and importance and when the mills, stores and cheese factory burned, they were not rebuilt. Today, Burritt’s Rapids is a quiet, but lovely, heritage jewel, a living and active community still preserving the character and the memories of its rich past.