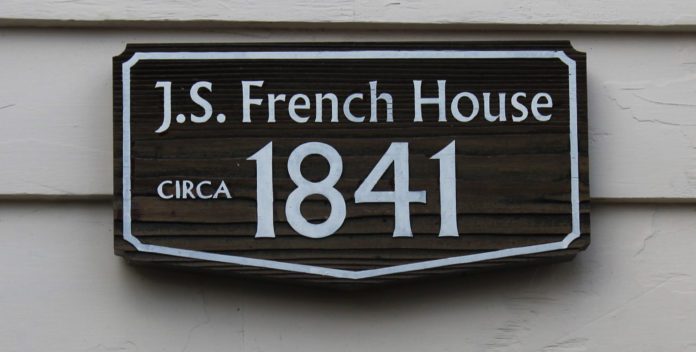 It was just a spontaneous thing, really. Burritt’s Rapids resident, Olivia Mills, was visiting Charlottetown, P.E.I., when she noticed that many of the old heritage houses had little plaques on them, giving the date they were built, and the name of the original owner. This, she thought, would look really good at home.

Olivia arrived in the village fifty years ago, with an Irish sense of history and heritage. In 1993, to mark the two hundredth anniversary of Burritt’s Rapids, she and fellow-resident, Renee Smith, produced a book which they described as “a collection of history, photographs, anecdotes and memories” about the village.

Arriving back from P.E.I., Olivia described the heritage plaques to Renee and decided that they would put a similar plaque on her house. Encouraged by Renee’s husband, Brad, they found someone to make the plaques and the first one went up on Olivia’s house. Built in 1841, and the oldest house in the village, the John Strachan French home was the appropriate one to be noted first.

But then, as people noticed the plaque, they approached Olivia about how to get one for their home, and so it began. Each home-owner pays for the making and mounting of their own plaque, although there is sometimes funding to support the initiative. Brad makes the arrangements with the makers, and it is a completely voluntary, resident-led project.

At first, the plaques were confined to homes along Grenville Street, then to the buildings on the island part of the village. But they are spreading further afield, and some homes on the Ottawa side of the river have also joined in. 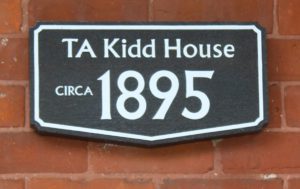 The project is a wonderful example of community at work: and Olivia believes it will help to maintain the traditional sense of Burritt’s Rapids as a community in the future. This, she was afraid, could be lost as new people gradually settled there, unaware of the depth of history and heritage which they were inheriting as residents of Burritt’s Rapids. These plaques are a constant reminder to residents and visitors alike, of the stories and people who came before them, and of whose heritage they are heirs.