The Chair of the Board of Trustees, Inge van Gemeren, walked everyone through the list of agenda items, including her own Chairperson’s Address, which contained a number of highlights, including the 225th anniversary of Burritt Rapids and the numerous projects going on in the hamlet.

Treasurer Jill MacDonald gave the Treasurer’s report, which contained some interesting information for local residents. On the income side of the finances, it was a banner year for hall rental fees. The hall took in $15,694 in 2017-2018, which was up 21% over the previous year. This was attributed to the work of the booking agent and the improvements to the hall itself. Overall, BRCA income was up 25% over the previous year which resulted in a net income of almost $10,000.

A significant chunk of the meeting was set aside to get public input on the preferred type of speed mitigation options that were being considered for Grenville Street (officially a United Counties of Leeds and Grenville road), which is the main street on the island between the two bridges. It started back in 2014, at a community meeting where residents decided they wanted to mitigate speeding on the street due to numerous complaints on the issue.

The journey to find a solution to the problem has been a long one, including multiple interactions with North Grenville municipal staff, which finally culminated in a trip to UCLG Council this past Spring, to keep something from happening upon which they felt they were not adequately consulted. It’s taken four years, but it appears the community finally has what it wants: the ability to choose their preferred method of what is now being called “traffic calming”, instead of “speed mitigation”.

This was the community’s first look at the options that were being considered. The presentation on the different methods was designed to get feedback, and the subject will be brought to the board meeting in January. These options ranged from reducing the posted speed limit (which seemed to be the most popular), to adding a pedestrian crosswalk (which seemed to be the least popular). No matter the choice, it’s taken considerable time and energy to get to this point and the residents should be proud of their efforts for self-determination.

Sometimes the little guy or girl can deliver a big punch. This would appear to describe the hamlet of Burritts Rapids very well when it comes to dealing with municipal government. Trying to tell the residents of Burritts Rapids what’s going to happen to them, without consulting with them first, is a mistake. 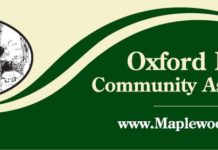