Blackbird Tattoo celebrated their grand opening last Friday, with the official unveiling of their logo in the window of the shop at 10 Prescott Street in Kemptville. Originally from Brockville, tattoo artist Melanie Jones worked at a tattoo shop in Ottawa for eight years before she decided to open a studio of her own. She and her husband Tyler, who looks after the bookings at the shop, live near Winchester and have always liked Kemptville, so it seemed like the perfect fit. They found their space by fluke while walking in downtown Kemptville, and called up the real estate agent to see if it was available.

Blackbird Tattoo officially opened on October 1, and Melanie is now booked solid until April. She is currently the only tattoo artist at the studio; but they are looking to add to their team. The response from the community has been fantastic, with 75% of bookings coming from local people.

Mayor Peckford offered her congratulations at the opening, welcoming Melanie and Tyler to the North Grenville business community. “We’re very thrilled to welcome you,” she said.

Old Town Kemptville BIA Executive Director, Deron Johnston, also offered his congratulations, welcoming them to the Old Town Kemptville family. “I’ve never seen such an easy transition in setting up a new business,” he said. “You’ve become part of the community in such a short period of time.” 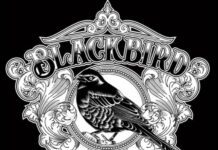