In June, 2009, the vegetation around a small pond we had dug in 1983, formerly dominated by Meadowsweet Spirea, began to be replaced by Phalaris arundinacea, Reed Canary Grass (RCG), and the photograph shows how this invasive plant has taken over the site.

Those who don’t recognize grasses as species won’t notice that one kind of grass is invading, and the invasive RCG embodies a lot of the complexity of many invasive situations. There are cultivated varieties with different palatability to livestock, and even with decorative striped leaves. Some of the varieties are high in alkaloid chemicals which make the plants poisonous or unpalatable for grazing. The invasive forms spread into dense stands which crowd out native species, and can even impede drainage through ditches, but there is a native form, with which the invasives hybridize, that grows sparsely in the shallows of northern lakes. There’s also a Mediterranean Harding Grass (Phalaris aquatica), which has been introduced as a forage species, and can hybridize with RCG.

Seeing the billowing yellow stands of RCG in Hydro and pipeline right-of-ways, and along roadsides and railways, along the northern Transcanada in 2014, we concluded that it was becoming a mascot of the resource transportation industry, and in eastern Ontario it crowds the shores of many streams, including the North Branch of the South Nation River at Inkerman, where the whole exposed bed of the stream and banks has been a solid mass of RCG, at least since 2009.

Grasses are hard to identify, and besides the native form of RCG which is smaller, often with small purple tinged seed heads and with practically all stems flowering, tending to form sparse stands, it’s also difficult to tell invasive RCG from native Bluejoint Reed Grass (Calamagrostis canadensis), whose leaves are bluish-green in colour, have darker purplish joints, and are rough textured with small hairs.

The Ontario Invasive Plant Council’s Best Management Plan for RCG is a desperate document: The dense stands produced by invasive Reed Canary Grass are highly aggressive… begin growing early in the spring, and grow quickly and in dense stands… quickly out-compete native species for space and nutrients… the dense stands in rivers may impede salmon spawning, and it grows too thickly for mammals and waterfowl to use for cover/nesting… also a threat to the native Reed Canary Grass, because it can hybridize with the native species. Least Bittern, Black Tern, King Rail, Henslow’s Sparrow, Short Eared Owl, Yellow Rail, Blanding’s Turtle, Snapping Turtle, and Chorus Frogs are at-risk animals listed as threatened by the spread of RCG.

The desperation continues through the suggested control methods: Pulling (“must be done at least 2-3 times a year for up to 5 years”), Mowing (“repeated mowing will prevent seed head production”), Digging (“care must be taken to ensure that the entire root mass & rhizomes are removed”), Grazing (“high in alkaloids which make plants poisonous or unpalatable”), Tarping (“cover with a dark material to block sunlight… may need to be left in place for more than one growing season”), Shading (“plant conifers or other native trees & shrubs which will provide full shade”), Burning (“should not be conducted too early in the growing season, as it may stimulate growth”), Create uneven ground surface (“furrows and humps to diversify the substrate”), Sawdust (“mulch around desirable wetland plants can remove excess nitrogen from the soil, favouring native plants that can survive on lower soil nitrogen levels”), Chemical Control (“the Ontario Pesticides Act and Ontario Regulation 63/09 provide natural resources, forestry & agricultural exceptions which may enable chemical control of invasive plants on your property”).

So this is another case of an invasive form of a plant which also has native populations, and one where there’s little hope of control. A difference in how leaf sheathes are shed has allowed the recent introduction of a moth that may cripple the invasive Phragmites while sparing the natives, but like the Cattails where most of our stands are aliens or hybrids, we’re probably going to have to live with these dense RCG stands along our roadsides and streambanks. 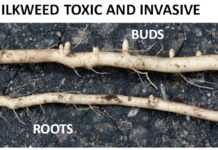 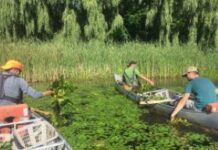 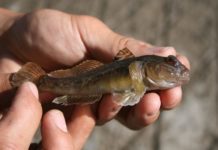