This summer, the Rideau Canal will see something the region hasn’t seen for decades. A convoy of big, voyageur-style canoes will be paddling the route from Kingston to Ottawa in time for the Canada Day festivities in the nation’s capital, and one of the stops along the way will be in Merrickville. The event is being organised by the Voyageur Brigade Society, which keeps alive the traditional voyageur culture with large canoes paddling along the old trading routes. For Canada’s 150th, the Society has arranged eight Brigades, including the Four Winds Brigade. The South Wind Brigade, which is planning the Rideau event, is part of the Four Winds.

The big voyageur canoes are 22 – 36 feet long and are normally paddled by 5-16 paddlers at a time. The South Wind Brigade starts at Kingston and proceeds north, following the Rideau Canal World Heritage Site 202 km to Ottawa. The final leg will leave the north end of the Ottawa Locks on the Ottawa River and follow the river upstream to Victoria Island. The trip will be done at a leisurely pace, allowing time to stop at communities and lock stations along the route, including Merrickville.

According to the Society: “Our vision [is] to fill the Rideau Canal with human-powered watercraft making their way through Canada’s Capital City…a Canada Day to remember!” An invitation has been made to other small crafts to join in the canal parade. “Smaller craft are also invited to join in on other portions of the route, particularly heading into Perth, Smith Falls, and Merrickville, where welcoming celebrations are being planned. Small craft paddlers should bear in mind that big canoes can go very fast and it is often difficult to keep up unless you are in a racing craft. Also, small craft paddlers will not be considered as part of the brigade and there will be no need to register. Small vessel paddlers need to be aware that they will not be covered under brigade insurance and you are out on your own … just out for a paddle … and happen to be paddling with these Big Canoes”.

The Times will be publishing more details of the South Wind Brigade trip in the coming southweeks, but if anyone is interested in becoming part of the Voyageur canoe crews, they can go to the Voyageur Brigade Society website at: www.voyageurbrigade.org and follow the link to the 2017 Big Canoe Journeys & Brigades page. 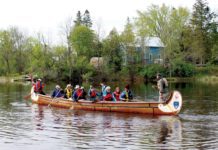 Another breath of South Wind 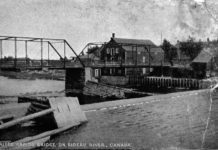