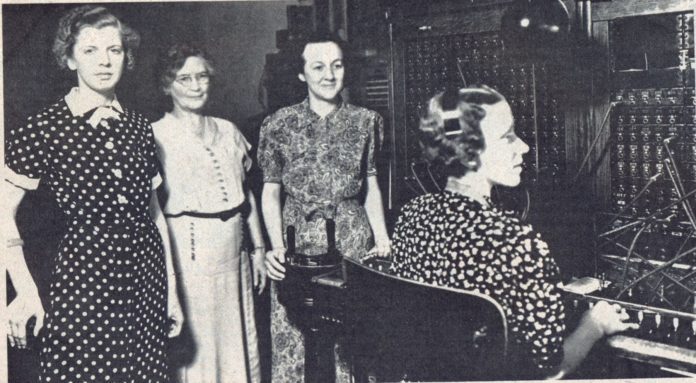 This picture of the Bell telephone staff was taken in the summer of 1939. Reading left to right is Mrs. Doug Sommerville (Bowen), Miss Urla Patterson, Mrs. Myrtel Cottage (Leeson) and Mrs. Lyall Milne (Gwen Hagan). The first telephone line arrived in Kemptville in 1894, connecting the village with Winchester. In 1896, the connection was extended to Ottawa, which opened up long distance lines to Kemptville. Before 1900, a telephone exchange opened in Anderson’s store on Prescott Street. For a period, the exchange shared premises with an undertaker.

The North American Telegraph Company opened telephone offices in this section of the country, and by 1895, reports of the company gave the long distance charge for a call from Kemptville to Cobourg as 85 cents, while a call to Ottawa was 35 cents and one to Pembroke, 55 cents for a five-minute conversation. Early in 1910, the North American Telegraph Company leased its telephone exchanges, lines and other telephone property to the Bell Telephone Company of Canada. Then, on February 14, 1911, this same telephone property and business were sold to the Bell. At this time there were about 100 local customers and by the end of 1912, the number increased to well over the 300 mark.

Telephone expansion continued steadily in the years that followed until the 5OOth set was installed by 1920. During the depression years there was a decline in the number of instruments. However, once the economy began its upwards trend, the number oftelephone customers began increasing once again, until the year 1950 witnessed a milestone – the 1,000th telephone went into use.

An important event in Kemptville telephone history took place on March 5, 1961 when telephones here were cut over to dial operation. Coincident with the cut over all Kemptville subscribers were assigned new numbers consisting of the exchange designation 258 and four other digits, to conform to the All Number Calling (ANC) telephone numbering plan.

Dial equipment to initially serve 1,600 telephones was installed in a new one-storey building on West Thomas Street. The 2,000th telephone was installed in Kemptville in 1966 and the 3,OOOth in 1972.Technology has outstripped all of the old exchange operations, and today we don’t even think about using cell phones and internet, and I often think smart phones are smarter than the people who use them! A very long way from that first phone call between Kemptville and Winchester.