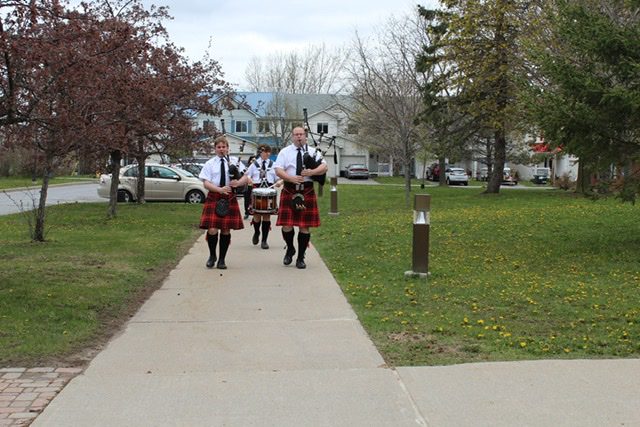 The full brunt of the covid-19 virus seems to be hitting long-term care facilities all over the world. To date, thankfully, there have been no cases confirmed in North Grenville’s retirement and long-term care homes. But the long isolation being experienced by residents at Bayfield has been lightened somewhat by local displays of caring.

Last Saturday, the “miniband” affiliated with the Kemptville Legion, Branch 212, took up their positions outside Bayfield and played for the residents. The Pipe Band is one of the longest continuously serving Legion pipe bands in Canada, formed in 1959. Wearing the Munro tartan to honour Ralph Munro, who was the first Pipe Major, their Pipe Major these days is Hugh Metcalfe. Hugh has been with the band since he was very young. 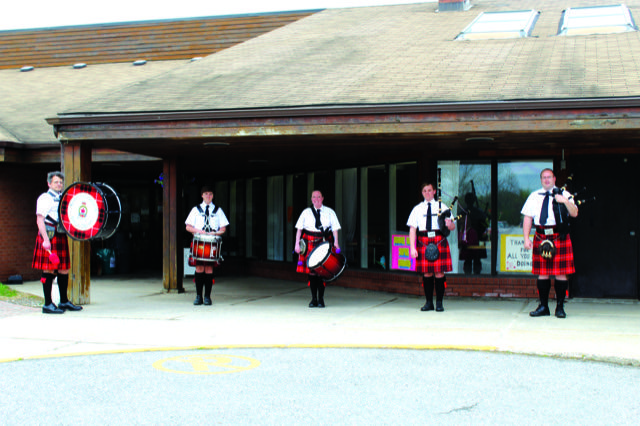 Noah Yateman is also a piper, as is brother Owen, who plays the snare drum. They have been with the Band for a few years now, and, while Kemptville is still their primary band, they now compete across Ontario with another band in Ottawa. Geoff Gander, on the bass drum, is the newest member, he just started learning the bass last summer.

Fiona Plunkett, the Executive Secretary of the Legion as well as Band Liaison, started out with the band in 2011 as a piper, but also fills in on tenor and bass drum, as needed. They gave a lively performance at Bayfield, where another great gathering took place on Mother’s Day.

Unable to give mothers and grandmothers a hug and a visit, a long line of cars went slowly past the doors of Bayfield, so residents could see and wave to their children, grandchildren, and family members who had not forgotten them.

It was an impressive sight to see so many cars in the procession of love, and it must have been a wonderful gift to Bayfield residents, just as the music of the Pipe Band was.

When not in the midst of a pandemic, the Kemptville Legion Pipe Band practice every Sunday at the Legion from 10-noon. They are always happy to have new pipers and drummers, from novice to experienced. Hugh Metcalfe can be reached at hughmetcalfe@yahoo.ca, or 613-794-0190. 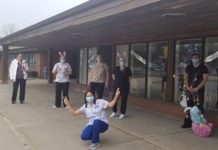 Cheering up residents at Bayfield