A local mom is making a splash in Easton’s Corners with a bath bomb workshop to raise money to send kids with diabetes to camp.

Tracy decided to get involved with Team Diabetes a few years ago, when she realized how many people in the community were affected by the disease. Her aunt and grandmother both have diabetes, as well as a neighbour and a little boy she used to look after when she ran a daycare out of her home. “It’s a good way to get the word out there about diabetes in the community,” she says.

Tracey’s two children were her inspiration for the bath bomb workshop, because they love to play with them in their bathtub at home. Through YouTube videos, and a lot of experimentation, she taught herself the process of making the bombs, which consist of a bunch of wet and dry ingredients and fun additions like bright colours and essential oils.

The workshop will be held at Centennial Hall in Easton’s Corners on Sunday, February 18, at 2 pm. The cost to participate is $30, or $50 for two, and every participant will go home with a variety of bath bombs to enjoy. Money raised will be going towards Tracey’s run, which will help send diabetic children to D-Camps, where they can connect with other children living with diabetes. Some of the money will also be donated to the Merrickville Fire Department.

Tracey says the workshop is already half full and she hopes to have all 24 spots filled by Sunday. “I really hope it goes well and people have a good time,” she says.

She will be holding other events to raise money for both Team diabetes and the Merrickville Fire Department in the coming months. A Mom2Mom sale, where parents can sell old children’s clothes and toys to other parents in the community, will be held at the Merrickville Community Centre in March. 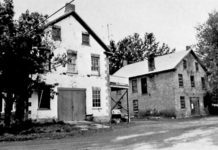 A piece of history for sale in Eastons Corners