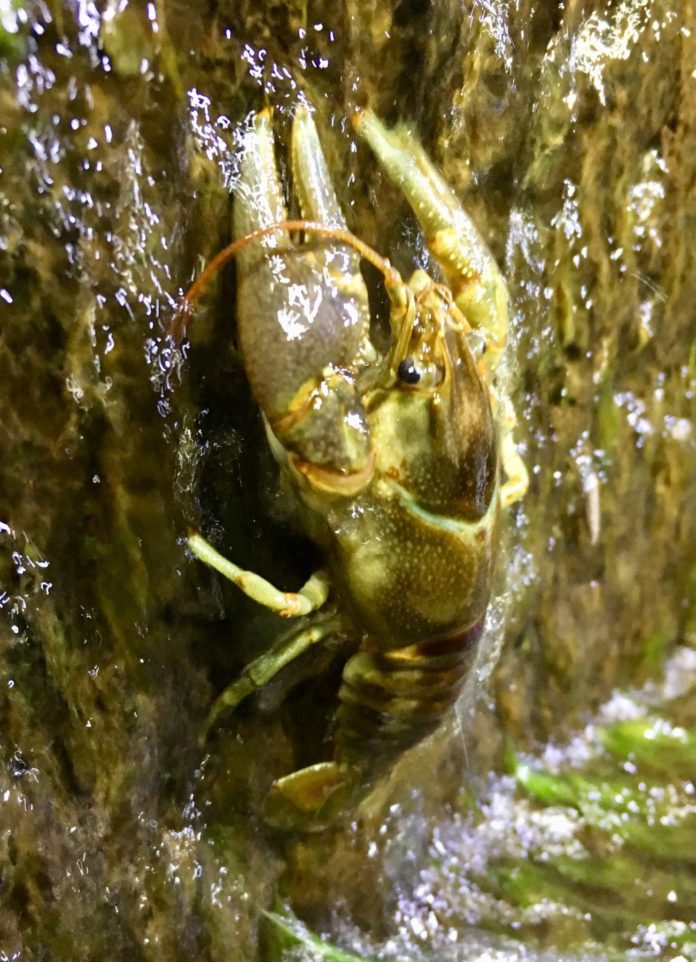 A new species of crayfish is taking over the Kemptville Creek. Naturalists Fred Schuler and Aleta Karstad have been noticing this new type of crayfish at the site where they do their Mudpuppy Nights, below the dam in Oxford Mills. The crayfish are a cross between the native Clearwater Crayfish of the Ottawa and Jock Rivers, and the invasive Rock Crayfish from the United States. Aleta says they crossed in the Ottawa River and then made their way up the Kemptville Creek. “Last year we saw hoards of them coming up the creek and climbing the dam,” she says, explaining that she put a video of them on YouTube called Attack of the Hybrids. “It was almost scary.”

Aleta says that, if any of the crayfish were successful in getting over the dam, they will be the parents of a very pioneering kind of offspring. With the specimens that Aleta and Fred have been collecting, they will be able to pinpoint how much of a hybrid these crayfish are by observing how much they are like their parent species. “It will be interesting to see which of the characteristics of the native species persist,” Fred says.

Fred and Aleta haven’t seen as many of the hybrids climbing the dam this year, and they have been seeing an accumulation of crayfish shells at its base. Fred thinks that they are being picked off by predators, most likely racoons, who wait at the base of the dam for them to start climbing the wall. This will probably cause the number of crayfish venturing up towards the dam to dwindle. “This population is not going to have an advantage of coming this far upstream because they are being picked off,” Aleta says.

The pair have become so fascinated by the crayfish that they are joking about turning their Mudpuppy Night into Crayfish Night in Oxford Mills.