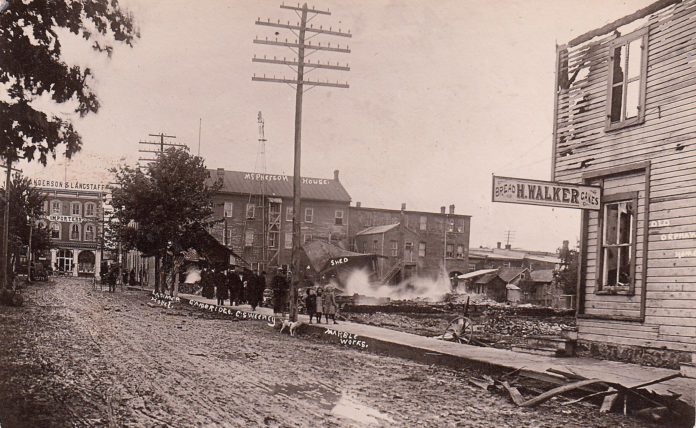 Kemptville has been plagued by serious fires throughout its history, and the corner of Prescott and Asa streets has been the source of some of the worst. In June of 1910, the town had just held its quarterly fair, the streets and hotels full of visitors and residents enjoying the festivities. That night, a fire started in the sheds at the back of the McPherson House hotel, the large building at the corner of Prescott Street, and spread to a neighbouring hotel. The Temperance House was owned by David Latimer and stood on the site where the parking lot across Asa Street from the Salvation Army Thrift Store now operates. The hotel had been in business for many years, under many owners, The photograph shows the destruction caused to the buildings along that side of Asa Street, the morning after the fire. Someone has written in the names of the buildings and businesses that had burned down. In fact, the only structure to survive between Prescott and Thomas Streets was a house on the corner of Thomas Street.

A fire engine from Ottawa was despatched to help fight the blaze, probably with the memory of the disastrous fire of 1872 in mind. But the local fire service had brought the conflagration under control by the time the Ottawa men arrived, helped by a timely shower of rain which helped to dowse the sparks.

None of the businesses destroyed were rebuilt, and the loss was estimated at around $10,000: a large amount in 1910. New homes were built along the street, and in later years, where the Temperance Hotel had stood, was Pelton and Reynolds Garage. They had the dealerships for the Dodge and Chrysler cars and for Massey Harris farm machinery.  Stables at the rear held the horses that they bought and sold.  They also bought and sold wood.  Often farmers traded horses or wood as part payment for the machinery they were buying.  Jack Kite and Garnet VanAllen were the mechanics in the garage.  A showroom for new cars was across the driveway where Bielby apartments now stand.

Interesting things in the picture include the muddy, unpaved street, the wooden sidewalk, and the trees that used to line many Kemptville streets. The Anderson Langstaff store on Prescott Street, facing down Asa, still stands today, though somewhat altered. All the buildings with their backs to the camera along Prescott Street are long gone.