The afternoon drizzle Monday, May 13 did not dampen the enthusiasm of more than 20 people out to explore the hidden heritage of Limerick Forest’s abandoned farms.

The group, which responded to the Rideau Valley Archaeology Society’s press and online invitation, was ably guided by Cary Gibson and Valerie Kirkwood from the Friends of the Limerick Forest. Dr. David Shanahan, historian for the North Grenville Historical Society, provided information regarding families and settlement.

The outing began at the Limerick Forest Interpretive Centre in the original part of Limerick Forest, now referred to as Limerick South. Among the Irish settlers of the late 1840s was Andrew Forsythe, who occupied 200 acres south of Bishops Mills on what is now the forest’s northern edge. He reportedly named the area Limerick, after his home county in Ireland, and the Forsythe Rd., running south from Limerick Rd., is named for him.

A few hundred metres west of the interpretive centre are the foundation remains (ca. 1875) of the Cochrane Family home. The enterprising clan was probably not the first to own the land, but the property remained with the Cochrane’s until 1940. As with many of the forest ruins, the exterior access to the cellar through the foundation wall is obvious, and the well, which served generations, is partially filled, and guarded by a cedar fence.

The explorers visited a number of sites laying off Limerick Rd., Forsyth Rd., and Cooper Rd., along the forest’s paths and trails. The dry-stone remains exemplified a range of mason skills from the rough amateur to the master. Traces of summer kitchens, outbuildings, and barns marked several properties. One site clearly defined what had been a two-storey barn with a natural, earthen grade accessing the upper level. A curious site may have been a springhouse. What had been a roofed structure preserved foods and beverages before the advent of icehouses. A narrow drain through the foundation wall led downhill, away from the building.

In late June, a volunteer clean-up crew will remove discarded materials, and fallen and dead trees from a site on the Alf Campbell Trail, east of the interpretive centre. In the early years of the Limerick Forest, this area had been a dumping ground. The volunteer Friends of Limerick Forest are committed to hands-on projects supporting the welfare and sustainable management of the forest.

Historic topographical maps, which include Limerick Forest, are available at ocul.on.ca/topomaps/collection/. 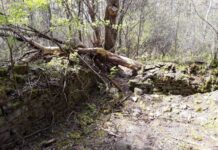 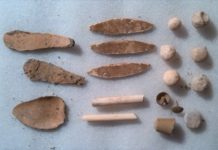 Accidental Archaeology; The Lost is Displayed