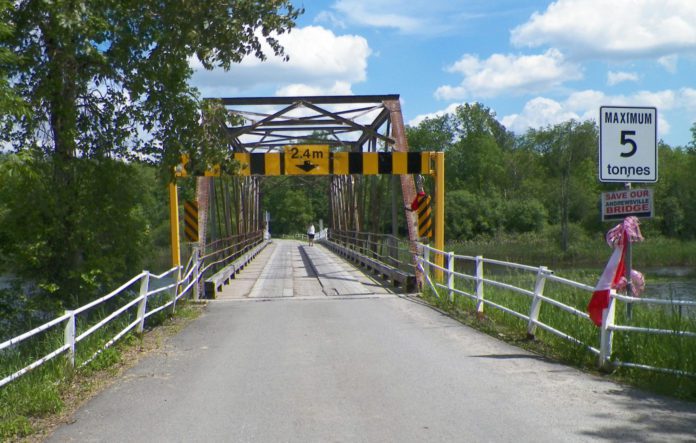 The United Counties of Leeds and Grenville Council passed a by-law at the end of October authorizing the closure of the Andrewsville Bridge, annually, from December 1 to March 31. This follows a similar by-law being passed by Lanark County Council on October 10. The two municipalities share the responsibility for maintaining the Andrewsville Bridge.

The recommendation to close the bridge over the winter came from a report prepared by Keystone Bridge Management, who assessed the status of the bridge through a wading inspection earlier this year. The report outlined significant deterioration on the bridge which was being exacerbated by de-icing salts during the winter months.

The Friends of the Andrewsville Bridge (FAB), who have been working tirelessly to save the bridge for the past several years, believe this solution is unacceptable. While they agree with the closure of the bridge this Winter, so that the Counties can carry out necessary repairs, they believe that the long-term closure of the bridge for months at a time will divide communities and inconvenience local traffic. “School bus access, First Responders/Emergency services would be adversely affected, as well as other services provided by individuals/businesses across the river, such as driveway snow clearing, pick-up and return of vehicles being serviced at Auto Repair shops, Trades People providing services, deliveries etc.” said a letter from FAB submitted to the Times.

Merrickville-Wolford Fire Chief, Mark Urquhart, says the closure of the bridge will not affect their ability to respond to calls across the river. He says there are other routes that are effective for getting to places like Andrewsville, and their large trucks are too heavy to use the bridge anyway. “This is nothing that is going to hamper our response in the area,” he says.

The United Counties of Leeds and Grenville and the County of Lanark have agreed to do the necessary repairs on the bridge this Winter to allow it to continue to be used in the warmer weather. The immediate repairs outlined by Keystone Bridge Management are the replacement of the stringers of the east approach span and the timber deck curbs. These repairs are estimated to cost between $75,000 and $110,000, to be split between the two counties. There is already an existing commitment by the Counties, covering the period ending April 2028, that has $110,000 remaining in the account, which should be enough to complete the repairs.

The solution of addressing the bridge’s immediate needs for repairs, and closing it over the winter, seems to be the most cost-effective solution for keeping the bridge open at this time. It is estimated that it would cost $3.3 million to replace the bridge entirely. A report from Lanark County suggests that future consideration will be needed for the long-term status of the bridge. FAB says they will be back at it in the Spring, lobbying for the maintenance and long-term use of the century-old Andrewsville Bridge. 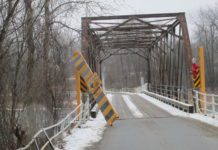 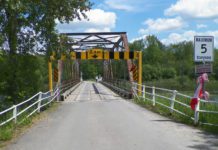