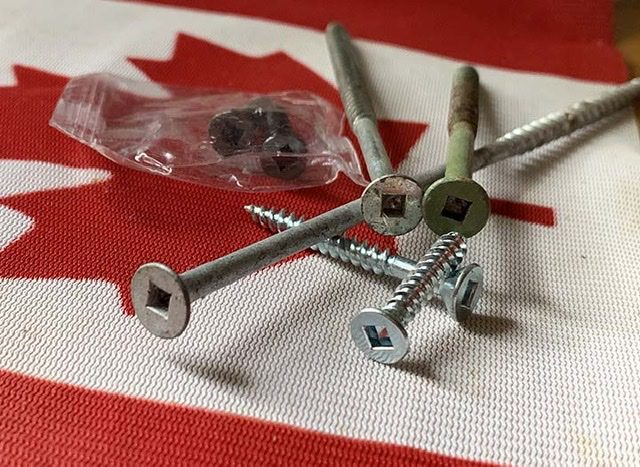 In 1906 Peter Lymburner Robertson, wounded by the slippery slot of the primitive screwnail, invented the square recess screw, or as patriotic Canadians call it, the Robertson-headed Screw. The goddess of geometry had spoken to Robertson in the language of optimality, and the ancient problem of how to drive a screw fastener had been solved. Jealous, however, of the desire to make these optimal artifacts, Robertson reserved manufacture to himself, while one Phillips, who had slipped out of his crossed slots in the Unruly States, licensed his inferior novelty, and wallowed in misgotten gains. While the licensed Phillips screw remained a wimpish thing, which dared the user – who never knew which driver to use – to attempt it, the Robertsonian confidently applied the appropriate tool – green, red, or black – to a screw that was a thing of elegance; high-headed, conical, with sharp-edged broad threads – as if already half-driven – and held it aloft like a trophy.

Robertson’s invention led to a Canadian screw-orgy: one no longer had to pre-drill before driving, and Canadians drove into recesses where anything not visible to the carpenter needed to be held together. The Canadian approaches the carpenterial fray with a Robertson screw held aloft like the lance of some Galahad of old, and while Galahad would have been sore tempted to curse vengeance at the slippery slot of a primitive system, screw and driver were now a single organic entity. The steel roof no longer worked loose and subflooring no longer creaked underfoot.

Nine-year-olds assembled Rabbit hutches with 3-inch screws rather than nails, and, after the passage of decades, they retrieved and reused the screws that had held ladder steps into tree houses in the crowns of Manitoba Maples.

Residues of slot and Phillips screws built up in the bottom of Canadian toolboxes, repeatedly rejected in the search for an applicable fastener. Much like the stars and eagles everywhere on Federalist architecture, vis- ible square-recesses marked shelves and kitchens as Canadian. Customers of antique shows flipped furniture over to see the Robertson screws and confirm Canadian manufacture, and the internet advised: “If you want to be strictly Canadian, you could use self tapping Robertson screws which give a somewhat neater appearance with their rounded heads.”