When you talk about tourism as a potential economic development opportunity in North Grenville, some people are inclined to refer to our perceived lack of a large commercial attraction, dominant physical landmark or other notable feature that would draw a significant number of people to our area. Herein lies what appears to be a very narrow understanding of what tourism is, what it could be and what is really needed to attract visitors.

Case in point, a recent visitor to Downtown Kemptville dropped off their rescue dog at a local veterinarian to have a surgical procedure done (poor little guy). The visitor had some time to pass, so they found their way Downtown to one of the local coffee shops and proceeded to get comfortable with a coffee and a book. Eventually, a spontaneous conversation started with a local resident and after a few minutes, the resident offered to show the visitor around to “see the local sights”.

The next couple of hours were spent exploring the assets of a community that some take for granted and may not realize might be very appealing for visitors to experience for themselves. This particular exploration involved visiting several sites including: a charming coffee shop with exposed brick walls, a community library that loans fishing poles (no fish were harmed), a bakery that operates the oldest commercially operated wood-fired oven in Canada (no apple fritters were harmed), an independent grocery store that specializes in selling local food products, a cozy park with benches, trees, beautiful flower beds & a picturesque view of the river, along with a visit to an internationally recognized charitable organization (where the pair were warmly welcomed without appointment) that provides water solutions to developing countries around the world.

The visitor was in complete awe of what they had seen, heard, touched, smelled and tasted. Their mind was truly blown away by the fact that all of these experiences were within walking distance of each other. Operating a social enterprise themselves, the visitor was able to make several connections along the way, including at a local yoga studio that will now sell their book and incorporate some of its content into their kids’ yoga program. When advised that a huge forest centre, an active sugar bush and the largest honey-producing operation in Eastern Ontario were also within walking distance, there was a genuine sense of disbelief.

Never has it been made more obvious that tourism isn’t necessarily about big shiny things. Sometimes, its about creating a memorable experience that allows people to connect to an area’s unique assets, character and people. This is the essence of “daytripping”, which means leaving home in the morning to travel to a nearby destination, experiencing what that area has to offer, and then returning home that evening. It’s a sector of tourism that is largely successful in rural areas that lie close to major centres like Ottawa. Residents of these large centres don’t always have the money or the time to travel very far. So by creating a destination based on unique experiences that city dwellers can’t get where they live, you create an opportunity to not only generate economic activity, but also to showcase all of the wonderful human, cultural and physical assets of your area.

Not what I think of as a tourist draw

Letter to the Editor – Tourism Coordinator 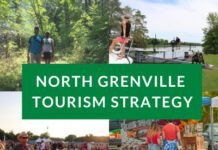