A lot of people had a lot of fun at Kemptville Live over the weekend; but there were some among the crowd who were not only left feeling disrespected – they were simply left behind. On Saturday, accessible parking spaces were taken up by people with no right to park there. People in wheelchairs were required to park quite a distance from the site entrance, and then found only one accessible porta-potty in sight. William Young was there with others who think that the Festival should have provided more accessible parking places, more visible facilities for those with accessibility issues, and, perhaps, a more sensitive and responsible attitude.

Organisers assured complainants that there were other accessible porta potties around the site, and informed William and friends, as he commented on Twitter, that: “We have accessible port a potty in other locations, not our fault that only one is visible and so people were not using the bathroom thinking there was only one”.

Things got worse after the concert ended, as the accessibility parking lot emptied of its illegally-parked vehicles, William was left waiting for the wheelchair van to arrive. He tweeted: “And here we are waiting for a wheelchair van to leave while the accessible parking lot is mostly empty because the people in accessible spots don’t have disabilities/permits”. He asked a volunteer to get on the radio and find out when the van would be arriving, but she responded that no-one was answering her radio calls.

Three-quarters of an hour after the music ended, a staff member finally turned up and assured William that “”We’ve done over and above what we should do, the accessible parking signs were put up by mistake, that’s VIP parking”. The staff members insisted that “We are over and above the law”, a small comfort to those left waiting to get home. Then, to add insult to insult, the security staff at the Festival started to leave for the night, with William and friends still waiting to be brought back to their vehicles.

Finally, an hour after the concert ended, transportation arrived and William and friends got home. It seems that the problem is not that accessibility facilities, such as parking spots, are not available; but that parking is not being monitored. Drivers without permits are being allowed to use accessibility places, leaving those who need them to park much further away from the entrance, and then being dependant on being transported back to their vehicles after the show ends.

Kemptville Live is well organised and these problems may be inevitable at times. But more care needs to be taken that the arrangements made are not screwed up by a failure to enforce the rules. Let’s hope William and friends are not put off a return visit. His overall comment on the day was positive: “we interacted with about a dozen volunteers who, with the notable exception of one, were all sympathetic and as helpful as they could be. The music was great, we had a lot of fun during the event – just not arriving or leaving”. 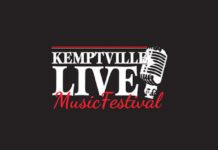