The all-candidates meeting held at the Municipal Centre last Thursday was a clear win for Democracy. A full house provided a series of intelligent questions on a variety of topics, and the four candidates present gave a good account of themselves over the two hours of the meeting.

People came from North Grenville, Merrickville-Wolford, and as far away as Prescott, to get a last chance to see and hear the candidates before the October 21 vote. After each candidate gave a 2-minute opening, the floor was opened to questions from the floor, as well as those in written form, handed in through the evening. Topics ranged from seniors’ issues, to electoral reform and climate change. There were questions on mental health, federal finances, and Canada’s treatment of veterans.

Michael Barrett, for the Conservatives, faced good questions on his party’s attitude to climate change, and made a clear declaration against electoral reform, stating that the current system “has served us well”. He was the only one of the four to take that position, each of the others being in favour of abolishing the First Past the Post system. However, Josh Bennett, of the Liberal Party, did not believe that one party should legislate reform without the agreement of the other parties.

Lorraine Rekmans, for the Green Party, was naturally strong on climate change matters, and linked moves to counter its effects with the need for a general reformation of our social and economic system. On immigration, there was a general agreement that it benefited the country, but needed to be carefully supervised. The question of pipelines raised a number of complicating factors, as the four discussed the need to transition to a more carbon-neutral situation.

Michelle Taylor, for the NDP, spoke eloquently and with passion on the matter of mental health, the need for more services, and especially the dreadful amount of spousal abuse in Canada. She and Lorraine emphasised that mental health must lose its social stigma in order to be dealt with effectively.

In fact, all four candidates were very well-prepared, spoke well and with conviction, and were each given generous rounds of applause for their contributions to the meeting. It was only when the matter of Justin Trudeau and the SNC-Lavelin scandal came up that things became a little hot and heavy. Josh Bennett was left to try and defend his party leader, noting that he had not committed any crime, and the audience showed their disagreement quite audibly.

Aside from the absence of the Peoples Party of Canada candidate, Evan Hindle, the all candidates meeting was an example of positive engagement on the part of the candidates and the audience. The full house illustrated the level of interest in the wider community in politics and a healthy democracy.

The meeting was sponsored by the North Grenville Times, with the valued support of municipal staff. 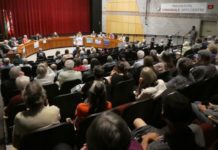