Two months into the ladies golfing season and only 50% of the games have been played. They had 4 days in a row of sunshine at the beginning of June where they were able to play on ALMOST dry ground. But alas it didn’t last. The course after this week is looking like it did in April, soaking wet with puddles overflowing on the fairways. I am running out of synonyms to describe what the rain is doing to the course, to our minds and to our hopes of ever being able to play with dry feet. We must not despair, the SUN will eventually come out and warm-up our bodies, for we are after all into July!

In spite of the clouds hanging over, the ladies were undeterred and played the “Jean Hyndman ” tournament. Twenty eight ladies signed-up to participate. A very enjoyable day was had, and all stayed for lunch while waiting for the straddlers to come-in and have the winners declared by Peggy. In first place and winner of the trophy was: Pat Hayes, 2nd place went to Willie Bridges. Kudos ladies and to all who dared to play!

RIDEAU GLEN LEGEND
The RG Legend have also played but only three times in the 2 months. Rain also dampened their games. But it is awesome to see some of the ladies who haven’t played for a few years, come out and mix-in with their peers. Their game may be a little off, but their perseverance and effort are gratifying,& to see them cheering for each other. Our “hats off” to you ladies!

GOLF/DINNER/MEETING
For the golf game, about 50 ladies had signed-up, but mother nature deterred the players from going out. Another game cancelled! Most of those who came out for the dinner were served a great meal by our caterer Don Miller and his helpers. Thanks Don, it was well worth coming our for the treat!

Pam led the meeting with a few announcements. Frankie Baird is ceding her post as captain to Jean Potvin who will take over making the 4somes for Tuesday league play. All thanked Frankie for her great patience and perseverance dealing with ladies. Jean will do it for the next 2 months. Good luck Jean! We know you will be up to the task. Patience is a virtue well accrued and undeterred…. no mumbling under your breath….

It was also suggested that we repeat from last year, the explanation of golf etiquette. Many ladies were anxious to put their name down on a list. Pat Hayes and her her crew of last year are willing to do it again. A date and time need to be set.

Pam announced that Cecile’s articles for the newspapers will alternate each month between the “Advance” and the “N.G.Times”. No doubling-up of our news, but exclusive for each paper. For this month’s look in the “N.G.Times”. So be it!

As I’m writing this, it is “Canada Day” and our 150th anniversary of Confederation. In spite of the deluge, thousands of people are on the “Hill” celebrating. Whether your ancestors have been here for generations or just a new Canadian, the pride of being in this country warms up the heart for we are a people of great feeling and pride to see the Maple Leaf carried with such tangible sensations. There are no OTHER COUNTRY IN THE WORLD LIKE CANADA—-Hey? 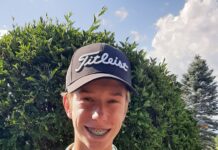