A local children’s toy and furniture business is among many promoting the spirit of Christmas this year, continuing its tradition of donating toys to a local Toy Mountain location. Jordan Loshinsky of JL Woodworking explained that the business has always donated “here and there” throughout the years. Last year, Jordan wanted to make a grander gesture with the donation of a sizable amount of wooden toy cars.

“We decided, why don’t we do something a little more on point?” Jordan said. “We made, I think it was 24-27 wooden toy cars.” The endeavor became a bigger deal than Jordan could have imagined, since he received donations from other local businesses who wanted to contribute to the initiative.

This year, Jordan made the goal of producing a donation of 50 wooden toy cars, and he hopes to increase the amount of the donation each year going forward. Helping out this year is Perkins Home Building Centre in North Gower, who donated the wood for the toy cars. Jordan had to pick up the tab for the metal axels for the cars out of his own pocket, though of course it was worth it. “We’re quite happy to do it,” Jordan added. He hopes to bring more attention to the initiative so that more local businesses will be on board to contribute in future years.

Different people have different reasons for contributing to the spirit of giving, but for Jordan it’s personal. “We have a bunch of kids of our own,” he said. “There’s lots of businesses at Christmas time and throughout the year trying to give to families in need, and we want to contribute to that. We want children at Christmas time to be included. It’s not food on the table, but it’s something nice and that’s the way that we can contribute.”

The bulk of the work in assembling the wooden toy cars this year took place last weekend, with the help of Jordan’s friend and his oldest daughter. The cars are made from wood, with metal axels and wheels, and a coat of non-toxic paint. They will be donated to a local Toy Mountain location.

JL Woodworking originally opened as a children’s furniture and toy businesses, but Jordan explained that the business has since expanded to serve other needs in the local area, including cabinetry and built-in woodwork. Jordan is hoping that next year the resources and community support will be able to contribute to a donation of 100 cars. 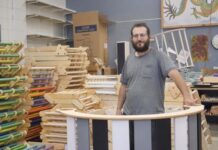